The Legend of Nickey Rackard

Born 100 years ago, the Wexford hurling legend took the game and the teams he played for to new heights, writes Dominic Williams.

The 28th of April 2022 marked the 100th anniversary of the birth of Nickey Rackard, who with the great Sean O’Kennedy, are the two most influential figures in the history of the G.A.A. in County Wexford. He made his debut for the County in 1942 and I have been privileged to have witnessed his exploits on the playing fields from the late forties to his retirement in 1957.

In the early fifties an extraordinary group of sportsmen emerged from the hurling wilderness who would put the county firmly on the map, breaking every record in the process and cementing their place among the major hurling forces for decades to come. 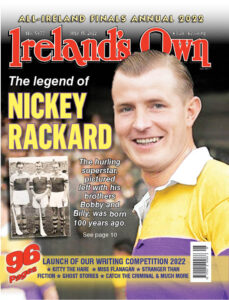 Previously the hurling landscape had been dominated mainly by the ‘big three’ – Kilkenny, Cork and Tipperary. But now for the first time ever a new force had emerged, performing in a manner which was to capture the imagination of hurling supporters everywhere. For followers too from counties not enjoying regular successes on the playing fields, Wexford quickly became their favourite team, their sporting behaviour, style and panache made them a side that attracted record attendances whenever and wherever they performed.

In order to properly assess the impact of the hurling heroes of the fifties, it is necessary to go back over a hundred years, to the 1918 All-Ireland hurling final. Wexford had won their first title in 1910, narrowly defeating Limerick in the decider. However, the Shannonsider’s gained ample revenge eight years later, outclassing Wexford by nine goals and five points to one goal and three points in the final.

The all-conquering footballers were of course dominating the championship at that time, completing six provincial and four All-Ireland titles in a row from 1913 to 1918. They were to continue to be a major force in the Province in future decades, winning championships in the twenties, thirties, and forties. Nevertheless, the 1918 defeat seemed to have a major physiological effect on the fortunes of the hurling men whose fortunes were to spectacularly nose dive over the upcoming decade.

Following four first round defeats from 1919-1922, a decision was taken to regrade to junior level from 1923-1926, a provincial success in 1926 prompting a return to the premier grade a year later. However, this decision proved a premature one, and between 1927 and 1939 over a thirteen-year period and with football still the dominant force, the hurlers survived the first round of the senior championship on only one occasion.

Nevertheless, encouraging signs were beginning to emerge and, with the 1910 hero Sean O’Kennedy now in charge of the Junior team, the county captured two provincial championships in 1940 and 1941, with for the first time the name Nickey Rackard of Rathnure appearing in the programme at centre field in 1940 and at centre forward in 1941.