The Magic of Writing

There is a magic and mystery to writing that has always fascinated the world, writes Maolsheachlann
O Ceallaigh

How do writers write? The phenomenally successful horror writer Stephen King, on being asked this question, always replies, “One word at a time. This answer is inevitably dismissed,” he goes on. “But that is all that it is.”

Despite this simple answer, King (like most other writers) has had a lot more to say about his writing process. The truth is that there is a magic and mystery to writing that has always fascinated the world, and that always will. 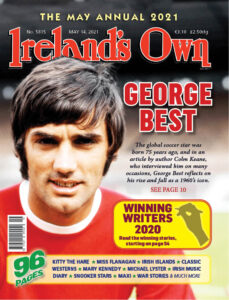 We marvel that a character like Dracula or Sherlock Holmes, or a story like A Christmas Carol – fictions so familiar that they seem a permanent part of our world – entirely owe their existence to the fact that somebody, once upon a time, put ink to a blank page. Even today, when the page has by and large been replaced by the computer screen, the magic of something coming from nothing remains.

“Where do you get your ideas?” All authors are asked this question, often to the point of exasperation.
The British fantasy author, Neil Gaiman, would sometimes respond, “From a little shop in Bognor Regis.”
But ideas generally come from somewhere.

Famously, the character of Sherlock Holmes was based upon a medical lecturer in the University of Edinburgh, Joseph Bell. The world was blessed that one of this lecturer’s students was Arthur Conan Doyle.

Conan Doyle was so impressed by Bell’s powers of deduction and observation that he made these the defining features of his master detective, who famously draws the most startling conclusions from the slimmest evidence.
Another detective character who was inspired by an actual person is G.K. Chesterton’s Father Brown. It was, in fact, an Irish priest, Monsignor John O’Connor – the same priest who eventually received Chesterton into the Catholic Church – who inspired the deceptively naive cleric-detective.

On only their second meeting, Monsignor O’Connor shocked Chesterton by the knowledge of human wickedness he had gained while working as a priest.

A little later, Chesterton was amused to hear two Cambridge undergraduates describe the Monsignor as a fine fellow, but sadly cloistered from the reality of the world. The irony of this stayed with Chesterton, and led to his most famous creation – the apparently woolly-minded Catholic priest whose powers of detection are based on his deep knowledge of human nature.

Of course, not all writing is fiction, and non-fiction writers have their moments of inspiration, too.