The Making of Hand Grenades During the War of Independence

“In Knockraha is as fine a place on earth with all the glens for making grenades,” Sean Hegarty told Martin Corry in October, 1920. Jim Fitzgerald writes how a team of bomb-makers, including molders working in Ford’s factory, used their expertise to help the Republican cause.

In October 1920, Sean Hegarty of the OC 1st Cork Brigade came out to Knockraha to meet Martin Corry, Captain of the local Company.

Knockraha is in the parish of Little Island near Glanmire and was a very rural area with a lot of glens and bogs near which was ideal for undercover work. Sean had recently become OC of the 1st Cork Brigade, taking over from Terence MacSweeney who had died on hunger strike in Brixton Prison.

Martin Corry, the Knockraha Captain, was the son of a chief constable in the RIC but was a committed Republican who got elected to Dáil Éireann in 1927 where he remained until he retired in 1969 and he was seen as one of the most colourful T.D.s in the Dáil. 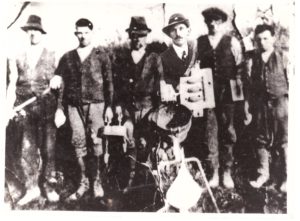 Sean Hegarty said to Martin that, “I am afraid as things look at the moment that we are going to lose the War for the lack of grenades and I have come here to Knockraha to discuss with you the possibility of making grenades.”
Martin’s answer was, “I am only a farmer’s son, I would not be capable of such a difficult task.”
Sean Hegarty replied, “Here in Knockraha there are two members of the Cobh Company who are on the run, Daithi O’Brien and Charlie Reed who are molders by trade working in Ford’s in Cork (which was opened in 1917). It would make them well qualified to supervise the making of the grenades.”

He said, “In Knockraha between Kilquane and Butlerstown is as fine a place on earth with all the glens for making grenades.”

He ordered, “Let your Knockraha Company make an underground dug-out for the factory and I will provide the men and the equipment to run it.”

Following Sean’s instruction Martin surveyed the area for a suitable site. He picked a ravine in Butlerstown glen where the water had cut into the ground to a depth of six foot and it was covered over by Sally trees which would make it hard to find.

He got members of the Company with picks and shovels and horses and butts to draw away the earth.
When this was done they got railway sleepers to support the roof and put two foot of earth on top of it on which more Sally trees were sat. The river was covered over with boards for a dry floor.

A small opening was made in the dugout which could be covered with a box of earth. Meanwhile, Sean Hegarty was organising the equipment for the factory.

Members of the Cobh Company under Mick Burke at gunpoint took over the dockyard in Cobh for a night and used its facilities to make a furnace to melt the ore. Meanwhile Daithi O’Brien and Charlie Reed used the foundry at their place of work in Fords, unknown to the management, to make the molds for the grenades.

All this equipment was brought to Butlerstown and put into the dugout. An oven had to be got for making the cores. Lime and sand were brought over from Passage West.
The iron for melting was got from pans and gates iron pipes from the Cobh waterworks and anything else they could get. Fords were raided for pig iron.
The brigade engineer inspected the facilities and gave permission to start making the bombs.
A team to work the bomb factory was assembled and they were now ready to start. The engine to drive the fans were also in place.

It would take six people to operate the plant. The first task was to make cores for standing in the molds so that the molten metal would run around. A mold had to be made for the cores.
The material for making this was sea sand and marley. They had to be baked in an oven on site which would make them very hard. The furnace was put in place in the dugout to be heated by fans driven by a petrol engine. The metal pipes and raw materials had to be broken up to fit into the furnace. 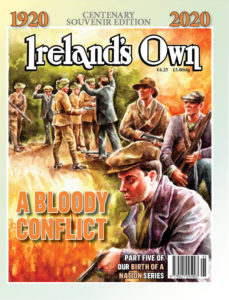 Coke was used to melt the metal. It would not give off much smoke which went up through a pipe placed in a tree trunk over the site.
It was by night that the work was carried out but a volunteer had to come in the early evening to light the furnace so when the men came late in the evening the metal would nearly be liquid so they would be ready to start making the grenades.

One of the molds was attached to an upright plank. The core would be put into it and the other half of the mold would be bolted onto it.
Then they had a ladle made from the top of the kettle. Taking the molten metal from the furnace into the mold was skillful and dangerous.
When ready the furnace would be topped with an iron bar. When the ladle would be full marley would be put over the hold to again seal it.

The one ladle would hold enough ore to make one grenade.
The molten metal would be poured in the hole on top of the mold and it would flow down around the core.
After cooling for a couple of minutes one half of the chill would be removed and the grenade would fall onto the ground. Then the sand would be picked out of the centre of it and it would be ready for arming.
On a good evening’s work they could make 60 grenades. Before Christmas 1920, Ned Fitzgerald of the Knockraha Company who was studying engineering at UCC came to work in the factory.
He said he could make a more efficient plant so he got permission to build another plant in Knockraha East which was done something similar to the one in Butlerstown except they had no motor to drive the bellows. It had to be done by hand machine.

From the time the plants were commissioned in 1920 until they stopped with the signing of the Treaty in December 1921 up to 3000 grenades were made.
Workers were paid one in six for each grenade made. The place were very hot to work in. Workers should go out for air every hour.

The grenades were taken into headquarters in Cork City disguised in bags of potatoes. They were armed in Cork and then they were distributed nationally and indeed many are now pop-up on display in many museums throughout the country. Their use greatly increased the firepower of the IRA.

The British never found the factories although army papers found after the Battle of Clonmult stated the British were aware the sand was coming from Passage West and going towards Knockraha.
They would have known that was possibly used for making bombs and more and more British army units searched the area.

They were combing the glens and fields of Knockraha on one occasion and they came near volunteers going home from the factory. The volunteers ran but the soldiers fired after them.
One member of the Knockraha company, Willie Mahony, got a few pellets in his leg. But they got away.

The general view of the Knockraha Volunteers were it not for the truce on 11th July, 1921, the bomb factory would have been found by the British with terrible consequences.

Read all about 1920 – The War of Independence in our centenary special, on sale now