The Making of McCluskey The Sea Rover

JIM REES writes about a little-known film made in Arklow
and starring Jack Doyle, the ‘Gorgeous Gael’

Let’s be honest, 1930s Ireland was not the most joyous place on the planet. The economy was stagnant as the young Free State tried to find its feet and tens of thousands emigrated for better lives. Old black-and-white photos capture the time and mood better than colour ever could. 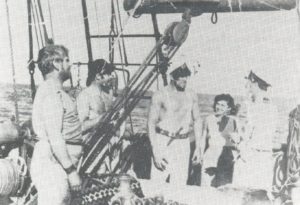 There was one source of brightness – the cinema. From the beginning of moving pictures, the Irish people fell in love with celluloid. After the opening of the country’s first cinema in 1909, picture-houses sprang up like mushrooms. By the thirties most of the population was addicted.
In fact, from very early days, film-making was a fairly common occurrence here, especially in the south-west. Many of these pictures have survived and copies are housed in the Irish Film Institute in Dublin.
One movie of which the Institute had no knowledge was a seafaring story starring the boxer, wrestling, singer, and showman Jack Doyle – the ‘Gorgeous Gael’.
It was 1934 and the County Wicklow town of Arklow was really on its uppers. The heyday of its fishing fleet was long gone, its one-time prosperous factories were closed. Then a report appeared in the Wicklow People newspaper announcing the intention of the British International Film Company to make Arklow the location of its next film.
It was to be a tale of derring-do on the high seas, based on a book by A. G. Hale, named McCluskey the Sea Rover. Immediately, there was a buzz in the air and a spring in the step of every movie buff and aspiring star.
Jack Doyle was the antithesis of the bedraggled town. He was young and handsome, and exuded that confidence and charisma so sadly lacking elsewhere.
Born in Cobh in 1913, he’d started a life of adventure at a tender age. Joining the British army in his teens, he quickly earned a reputation as a boxer. Turning professional, he had a series of impressive wins.
By 1934, he was riding the crest of a wave. Rich pickings in America beckoned, but his manager advised him to put these on hold when he was offered the role of McCluskey. At least, in Arklow the film has always been referred to as McCluskey the Sea Rover, but film magazines of the time refer to it as McGluskey the Sea Rover.
Whatever the name, Jack Doyle was on his way to Arklow.
At the end of October 1934, a group of about thirty arrived on the Rosslare ferry. A special train had been arranged to convey them and their considerable luggage and equipment to Arklow. The equipment alone took up five carriages.
Doyle, being the star, was chauffeur driven to the temporary Hollywood-by-the Sea.

Continue reading in this week’s Ireland’s Own (Issue 5548)