The Making Of The Movie – Easter Parade

When MGM producer Arthur Freed was looking for a follow-up to the 1944 musical Meet Me In St Louis staring Judy Garland in one of her best roles, he wanted something similar. The hit movie had tapped into the public’s nostalgia for the simpler times of the early 20th century. 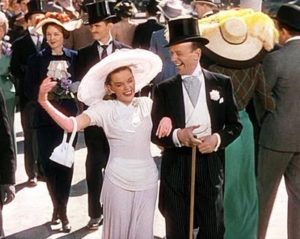 An idea began to crystallise in Freed’s mind based around New York’s Easter Parade, held annually along Fifth Avenue for the previous 100 years. There was even the famous song – Irving’s Berlin’s 1933 hit Easter Parade.

“I planned to raid Berlin’s back catalogue and have the composer write new songs especially for the new picture,” he recalled. “But Berlin was already talking to 20th Century Fox about a similar project. As luck would have it, Berlin, who was notorious for driving hard bargains, asked for more money than Fox was prepared to pay him. So Louis B. Mayer, my boss at MGM, told me to offer Freed whatever he wanted, which I did.”

While Mayer paid Berlin handsomely for his songs, money was not the only motive for the prolific songwriter agreeing to the project. “The reason I got to agree to write the tunes was on account of Judy Garland,” Berlin said in his retirement years. “Every composer there ever was wanted to write for Judy and I was absolutely delighted I got the opportunity.

“Well, there were two reasons really. I loved Gene Kelly, sure I did, but when Gene had to pull out with an injury and was replaced by Fred Astaire, I was over the moon. I was sorry for Gene’s mishap, of course I was, but I admired Fred for years. We were friends all our lives and he was a master of putting over a lyric.”