The Man Who Created Scrabble

A knowledge simulation built around the concept of creating words on a board competitively, but only utilising words accepted in a reputable dictionary of the English language, sounds like a complex proposal does it not? Well, it is in actual fact the popular game of Scrabble known across the globe, with over 150 million sets estimated to have been sold. 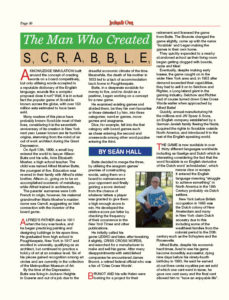 Many readers of this piece have probably known Scrabble most of their lives, considering it is the seventieth anniversary of its creation in New York next year. Lesser known are its humble origins, stemming from the mind of an out of work architect during the Great Depression.

On April 13th, 1899, a small boy entered the world to lawyer Allison Butts and his wife, Arrie Elizabeth Mosher, a high school teacher. The child was named Alfred Mosher Butts, the youngest of five. Education was revered in their family with Alfred’s elder brother, Allison Jr., going on to be an accomplished academic of metallurgy, while Alfred trained in architecture.

The parents’ surnames were both French in origin, however, his maternal grandmother Maria Mosher’s maiden name was Carroll, suggesting an Irish connection with the inventor of the board game.