The Man Who Invented the Vacuum Cleaner

In the late 19th century several inventors began experimenting with the idea of producing a machine which could pick up dirt and dust, a vacuum cleaner. The earliest models, mainly produced in the United States, were more like carpet sweepers until Ives W. McGaffey introduced his ‘Whirlwind Cleaner’ in Chicago in 1868. 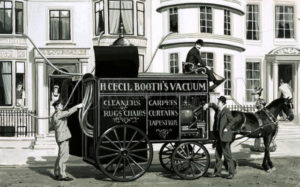 The problem with this machine was that the operator needed to turn a hand crank at the same time as he was pushing it across the floor. Unfortunately, he lost most of his machines during the great fire in the city in 1871.

At the end of that century, John Thurman introduced his ‘pneumatic carpet renovator’, so large that horses were needed to pull it from building to building. It did blow the dust away, but it didn’t actually have any receptacle to collect the dust.

The man with the strongest claim for inventing the true motorised vacuum cleaner is an Englishman, Henry Cecil Booth.