The Many Faces of Ebenezer Scrooge

There are a few characters in literature and popular culture, which have been portrayed on the movie screen time and again. Sherlock Holmes, Dracula, Superman and Batman are a few obvious ones.

One particular seasonal character, the miserly Mr Scrooge, has been portrayed by many different actors since the very early days of cinema. 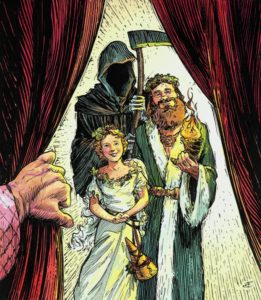 The central theme of the salutary paranormal Christmas Eve night, experienced by the miserable central character, is as evergreen as holly and ivy, and has been expanded on time and again over the years.

The earliest movie adaptation found dates from 1901; it is a short movie, which in its original form condensed the eighty-page story into just five minutes. Only 620 feet of this 35mm film survive but it shows what an ambitious project it was for the time. Little things, like superimposing Marley’s face on the doorknocker, which an individual can do on a computer today were major undertakings one hundred and fifteen years ago.

Continue reading in the Christmas Annual 2016