The Munich Air Disaster, 60 Years On

On February 6th, 1958, Manchester United were returning home from a victorious European Cup match when the aircraft in which they were travelling crashed on take-off in Munich. Many of the young players lost their lives, including Dublin-born Liam Whelan, writes Seán Creedon.

There has always been huge interest in the fortunes of Manchester United among Irish soccer supporters. Tommy Morrison was the first Northern Ireland international to play for United when he signed in 1902, while Dubliner Patrick O’Connell was the first from The Republic to join the Red Devils in May 1914.

Down through the decades those two ‘pioneers’ have been followed by over 50 senior internationals, from North and South, who would wear the famous red jersey of United. 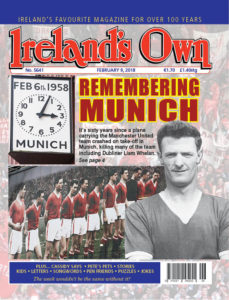 However, I think it’s true to say that the Irish love affair with the club grew fonder following the Munich Air Disaster sixty years ago this month.

On February 6, 1958 flight BEA 609, piloted by captains James Thain and Kenneth Rayment and carrying the Manchester United players, officials, journalists and diplomats, crashed on its third attempt at take off at Munich-Riem Airport. Twenty three people died and only 21 survived.

Former Manchester City goalkeeper Frank Swift, who was covering the game for the News of the World, was among the eight journalists to perish; he died on the way to hospital.

After being delayed on their return from Dukla Prague in an earlier round of the competition, United booked a charter flight for their quarter-final tie against Red Star Belgrade. The plane used was an Elizabethan-class Airspeed Ambassador and it needed refuelling on both trips; Munich was chosen as the refuelling stop on the way out and back.

United won the first leg 2-1 at Old Trafford and a 3-3 draw in the second leg in Belgrade was enough for them to qualify for the European Cup semi-final. The sun was shining when flight BEA609 left Belgrade that Thursday morning, but by the time it reached Munich snow had started to fall. After refuelling, two attempts at take-off were abandoned due to engine trouble.