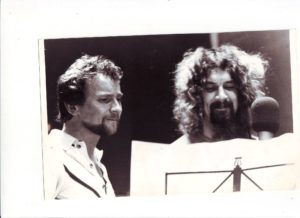 When you say the name Phil Coulter, so many things come to mind – multi-award winning performer and  songwriter, white linen stage suits, Eurovision, Classic Tranquility, Sandie Shaw, Cliff Richard, Luke Kelly…the Derry born musician, songwriter and producer is one of Ireland’s greatest talents and perhaps it is with the latter mentioned, Luke Kelly, that his musical genius will forever be associated.

“I can tell you The Dubliners were unimpressed when I was asked to write songs for them,” remembers Phil Coulter. “Despite a good track record, I had to earn my stripes all over again with them. Luke was fairly unimpressed that I had sold millions of pop songs and would badger me to write songs and address important issues. ‘You’re smart Phil’, he’d say, ‘use your skills to write songs that need to be written.’ It’s no coincidence that the song closest to my heart was written with Luke Kelly’s voice in my ear.”
That song, The Town I Loved So Well, captures the essence of its songwriter – a man proud of his Derry roots and of his community.

Phil Coulter was born on February 19th, 1942, in the midst of the Second World War. It was an era of air-raid shelters and ration books. He was the middle child of five, with his father, Phil, from Strangford in County Down, working as one of the few Catholic constables in the Royal Ulster Constabulary. The family lived in a simple terraced house in Derry, not well-off, but not poor either.

Unemployment was high, but the picture wasn’t entirely a bleak one. Having music in the house was part and parcel of the Derry ethos, and even in those deprived times, a piano in your ‘good’ sittingroom was more important than a three-piece suite.

“Our house was no different,” recalls Coulter. “We had an upright Challan piano and our house was always full of music. If there was an excuse for a party, it would be at our house. My mother (Agnes) and father were musical with a small ‘m’. My father played the fiddle, my mother played along on the piano by ear. It wasn’t the most professional musical performance you’d ever hear but what I learned from it was the enjoyment they were getting from it, and the enjoyment from the people around them.”
It would be a while before a young Phil Coulter would get enjoyment from playing music himself. Like his brothers and sisters before him, he was duly sent along to piano lessons, aged six, where a rap on the knuckles wasn’t uncommon if the scales didn’t sound just so.

A mischievous Phil even tampered with the family mantelpiece clock to shorten his daily half hour lessons! “I used to put the clock forward because it ‘pinged’ on the half hour and ‘pinged’ on the hour. So if I had to practise between four o’clock and half-four, I’d start at four but I’d nudge the clock forward five or ten minutes so the half hour would ‘ping’ a little earlier and I’d emerge happily and slam the door shut, and go. That worked for a long time before I finally broke the clock! That brought the wrath of God on me,” laughs Coulter.
However, his possibly knowing father decided to wait until his son was ready to appreciate music himself, and didn’t force any further lessons on him.
“He left me to my own devices so in the next couple of years I reverted back to the piano to play by ear. I’d hear pop songs on the radio and I’d pick out the melody on the piano. The very first song I ever tinkled out was on all the black keys of the piano – a song called Buttons and Bows from the movie Paleface. And right there was the beginning of some kind of fascination with how this all works.”