I can’t remember when I first heard the news but I remember the excitement I felt 63 years ago back in 1957 when Rock ‘n’ Roll was in swaddling clothes. Bill Haley and the Comets were coming to the Hippodrome in Belfast.

“Who’s Bill Haley?” the young will ask. But those who know their Rock ‘n’ Roll history will recognise ‘Rock Around The Clock’ as one of the biggest selling records of all time. That was Haley’s biggest hit and the anthem of a new breed of people called ‘teenagers’. 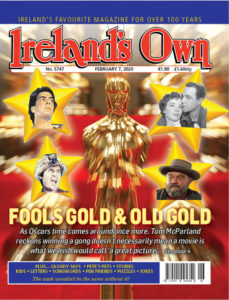 Up until then those twixt twelve and twenty were just cut down versions of their parents. Boys wore the same kind of suit as their fathers and sometimes even the same suit if it was handed down to them. Girls wore the same dowdy coats and headscarves as their mothers or big sisters. But that was all about to change. Forever.

Food rationing had ended in the North in 1954 and post war austerity was fading from the public consciousness as prosperity ushered in a new age of optimism. Teenagers had jobs and money. Money to buy records. Money to buy a ‘Teddy Boy’ suit with a long coat and drainpipe trousers. ‘A Dollar down and a Dollar a week’ from Burtons Tailors. Money to buy a new pair of black or blue suede shoes and you were off to the ball and what a ball it was.

And, to top it off, a new hairstyle modelled on that of Hollywood film star Tony Curtis. It was called a ‘D.A.’ Some thought that ‘D.A.’ meant District Attorney but most of us believed that it referred to that part of a duck’s anatomy it most resembled! Meanwhile the girls were ‘cutting a dash’ with calf-length tight skirts, bobby socks and flattie shoes. And of course, the Ponytail to crown it off.