The Olympics at the Movies

Even if you’ve never been to an Olympic Games, there’s something special about watching all the events on TV. The summer Olympics in Rio this year will be no exception, when the likes of synchronised swimming, gymnastics and weightlifting will be a novelty on our TV screens at 7am. But many of the Olympic athletes have a  wonderful story behind them that doesn’t ever get told on TV. Instead, movie-makers over the years, realised that audiences would love a good film based on the Olympic games, its athletes and their tremendous tales in fighting for that much coveted gold medal. Here are but a few Olympic movie classics, some based on fact and some entirely fictional but great stories none the less. 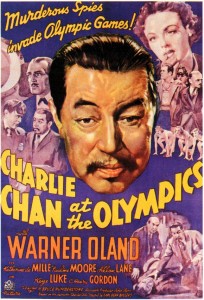 CHARLIE CHAN AT THE OLYMPICS
This 1937 film, starring Warner Oland , features actual footage from the 1936 Berlin Olympics. Charlie Chan’s oldest son Lee is chosen to compete in the Olympics, however murderous spies invade the Olympic games when the “Hopkins plane”, demonstrating an improvement of remote radio control to the US military hijacked by a concealed stowaway.

GEORDIE
Geordie (released in the United States. as Wee Geordie) is a 1955 British film directed and co-produced by Frank Launder, with Bill Travers in the title role as a ‘wee’ Scotsman who becomes an athlete and competes at the 1956 Summer Olympics in Melbourne.
The film is based on David Walker’s 1950 novel of the same title, adapted for the screen by Launder and his co-producer Sidney Gilliat. When  Geordie is  sent to the Melbourne Olympics to represent Britain in Hammer-Throwing, he insists on wearing his kilt!

IT HAPPENED IN ATHENS
Starring Jayne Mansfield, this 1962 American-Greek romantic comedy drama  may be one of the lesser known movies featuring the Olympic Games. In 1896 it is announced that the Olympic Games will be revived in Athens. A young shepherd called Spiridon decides to enter in the marathon. Also running is one of Greece’s most powerful men Alexi Vinardos. When famous actress Eleni Costa (Mansfield) announces that she will marry the winner of the marathon, having faith that it will be her beloved Vinardos, things don’t go according to plan.

DOWNHILL RACER
Downhill Racer is a 1969 American drama film starring Robert Redford and Gene Hackman. The film is about a talented downhill skier who joins the United States ski team in Europe to compete in international skiing competitions. However his determination to become a champion and his success on the slopes alienate his coach and teammates. After a second successful year of races, he goes on to win the gold medal at the 1968 Winter Olympics in Grenoble.

CHARIOTS OF FIRE
Probably one of the best known Olympic Games movies, the famous opening scene of Chariots of Fire depicts a group of runners along the West Sands Beach while the instantly recognisable musical instrumental by Vangelis plays in the background. This 1981 British film starring Ben Cross and Ian Charleson is based on the actual story of two athletes in the 1924 Olympics – Eric Liddell, a devout Scottish Christian who runs for the glory of God, and Harold Abrahams, an English Jew who runs to overcome prejudice. Chariots of Fire won four Academy Awards.

THE JESSE OWENS STORY
The 1984 movie tells the amazing story of four-time Olympic gold medallist Jesse Owens. Owens was a young African-American who would become one of the greatest modern Olympian athletes when he proved Hitler’s boast about the ‘Aryan athletic superiority’ wrong by winning four gold medals, setting world records and becoming the star of the 1936 Berlin Olympics. 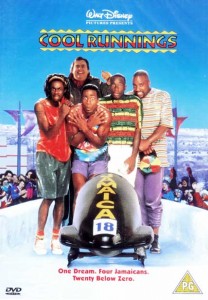 COOL RUNNINGS
This heart-warming 1993 comedy starring John Candy It is loosely based on the true story of the Jamaica national bobsleigh team’s debut in competition during the 1988 Winter Olympics in Calgary, Alberta, Canada. When a Jamaican sprinter is disqualified to the Olympic Games, he enlists the help of a dishonoured coach to start the very first Jamaican Bobsled Team.

WITHOUT LIMITS
The 1998 film follows the life of famous 1970s runner Steve Prefontaine from his young days in Oregon to the University of Oregon where he worked with the legendary coach Bill Bowerman, later to Olympics in Munich and his early death at 24 in a car crash. Billy Crudup plays Prefontaine and Donald Sutherland plays Bowerman, who later co-founded Nike, Inc. Without Limits was produced by Tom Cruise but due to a very low-key promotional campaign, the $25 million film grossed only $777,000 at the box office, although Sutherland received a Golden Globe nomination for Best Supporting Actor.

MUNICH
Directed by Steven Spielberg, this 2005 film recounts the aftermath of the notorious kidnap and murder of 11 Israeli athletes at the 1972 Olympic Games in Munich. The Israeli intelligence service sends agents to kill those it believes are responsible, but soon doubts emerge about how closely the targets for assassination were involved. 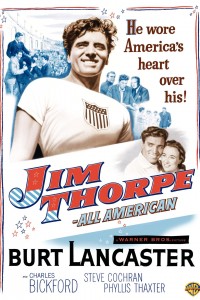 JIM THORPE – ALL AMERICAN
Burt Lancaster stars as Jim Thorpe, the Native American sports star whom many consider the greatest athlete of the 20th century. Young Thorpe excels at sports and enters the 1912 Olympics at Stockholm, where he earns more gold medals than anyone else. Unfortunately, the fact that Thorpe briefly played semi-professional baseball while attending Carlisle costs him his amateur status and his medals. This is the story of a life of glory, swiftly followed by tragedy.

UNBROKEN
Angelina Jolie directs and produces Umbroken, an epic drama that follows the incredible life of olympian and war hero Louis Louie Zamperini who, along with two other crewmen, survived in a raft for 47 days after a near-fatal plane crash in WWII – only to be caught by the Japanese navy and sent to a prisoner-of-war camp.