The Originals – Ireland versus New Zealand, 1905

On Saturday, 25th November, 1905, the very first international rugby match between Ireland and New Zealand took place at Lansdowne Road. This historic occasion was played in front of a capacity crowd of 12,000 at the original home of Irish Rugby. Ireland faced highly rated opponents known as ‘The Originals’ due to the fact they were the first New Zealand national rugby team to tour outside Australasia.

The New Zealand rugby team also became known as the ‘All-Blacks’ during this tour as it was the first time that the team wore black jerseys, shorts and socks as an entire strip. The Express & Echo Newspaper in Devon appeared to be the first to use the term ‘All-Blacks’ in their report of the touring side’s win over Devon in the opening game of their tour. 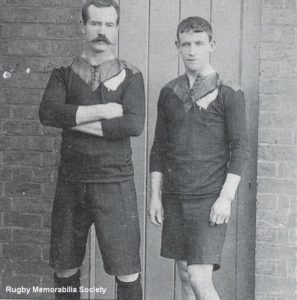 The ‘Originals’ visited Britain, Ireland, France and the United States during a remarkable run that saw them win all but one of their 35 games during their tour of 1905-6 (a 3-0 defeat to Wales). Indeed, they had such a fearsome reputation that in the Dublin Evening Mail former Irish international player E. G. Brunker opined that no combination of players from Ireland, England, Scotland or Wales could beat the All-Blacks in their current form.  He also claimed that the New Zealand players wore silk jerseys, making it more difficult to tackle them!

Ireland prepared to face New Zealand amidst such hype that the Irish Rugby Football Union (IRFU) actually made the match the first all-ticket rugby international in history. By the time the All Black ‘Originals’ had arrived in Ireland, they had already played 21 tour games without a loss, and had defeated the best clubs and counties England and Scotland had to offer.

Ireland was considered a strong rugby nation in that era. They had won the Home Nations title in 1896 and 1899, the latter with a triple crown. The famous 1896 British Isles squad – who would later become the British and Irish Lions that travelled to South Africa and thumped the hosts 3-1 while winning 17 tour matches – contained no fewer than nine Irishmen.

Ireland, of all the Home Nations, was considered by many to be the best equipped international side to combat the New Zealand ‘new world’ approaches. Apparently these were unique formations that were giving the ‘Originals’ “unfair success with unique tactics not penalised by poor refereeing” as one famous English report once suggested.
However, cordial relations ensured that the Irish warmly welcomed the ‘Originals’, with several IRFU officials taking the entire squad out for breakfast the morning they arrived in Belfast.

The fact that All-Blacks tour party captain Dave Gallaher was born in Ramelton, County Donegal (he moved to New Zealand at age four), further endeared the New Zealanders to the Irish, with thousands awaiting the All-Blacks when they arrived at the Dublin train station.

And there were other Irish connections in the team, with surnames such as Casey and O’Sullivan featuring on the New Zealand team sheet that day in 1905.
As for the game itself, New Zealand performed their legendary ‘Haka’ before it commenced. For a 30-minute period in the first half the Irish forwards dominated, however the deadlock was broken close to half time when Bob Deans scored a try under the posts.

He scored another early in the second half, before Alexander McDonald scored the ‘Originals’ third to give them a comprehensive 15-0 victory against an Ireland team captained by C. E. Allen.
The New Zealand team then headed to Limerick to play Munster, with the match being played on Tuesday, 28th November.  The Limerick Leader, was in awe of the visitors from the southern hemisphere: “The New Zealanders are the men of the moment. Their visit has shaken up the dry bones of rugby football and created a revival in the game that will be felt for years to come.”

The 1905-6 ‘Originals’ All-Blacks tour of Britain and Ireland went on to achieve legendary status within the rugby world – and New Zealand in particular. They scored 976 points and conceded only 59, and thus set the standard for future All-Blacks sides.
This month, the Irish rugby team is scheduled to play New Zealand in the American venue of Chicago on Saturday 5th November, with a home fixture against the back-to-back World Cup champions in the Aviva Stadium on November 19th. Ireland have never beaten New Zealand in 28 attempts, dating back to that first meeting in 1905; with the best result for Ireland a 10-10 draw at Lansdowne Road in January 1973. ÷