In April 1919, the people of Roscommon town fell under the spell of a very strange preacher.
It’s said that he had an “unusual range of voice” and that he spoke with “extraordinary eloquence” on everything from religious matters to the threat of another war. And everyone was welcome at his sermons, which he held outdoors in a thickly wooded part of Carrowroe Park.

But while many made their way there and heard his words and prayers, none ever saw him. For the Roscommon preacher – we are told – was invisible. 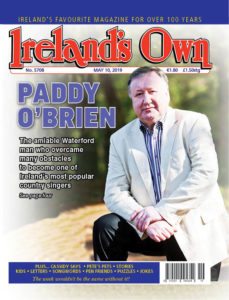 The sermons began in the first week of April. And while it’s not clear how they got started or how people knew about them, it seems that, quite quickly, hundreds were gathering each night to hear him speak.
And amongst the faithful were the Royal Irish Constabulary, who were very keen to get a private audience with the preacher.

With his fame growing rapidly, the preacher declared that he was going to hold a ‘special lecture’ in the park on Sunday, 6 April.

They came from all over Roscommon to hear the ‘special lecture’. And huddled in the small wooded area, flanked by armed police, they waited. After quite some time, the silence was broken by the unmistakeable voice of the preacher, reciting the Rosary in Irish.

The crowd surged towards where they thought his voice was coming from. The police followed – and immediately began searching the woods.
They found nothing.
The preacher had stopped praying during the search. And while many stayed on after the police had left, his voice wasn’t heard again that night.

A few days after the aborted ‘special lecture’, there was a rumour that he would return on the following Sunday night.

So, on 13 April, 1919, hundreds of people once again gathered at Carrowroe Park – and waited. Then, just after 9 pm, the preacher began speaking, his voice seemingly coming from a small grave.
He opened this sermon with a number of predictions. He said that there would be a major earthquake that would ruin a great part of the world; that there would be another major war; and that some of the world’s most powerful empires would experience internal struggles.

Shortly after it began, the sermon ended with another police raid. Despite coming from two sides simultaneously, they still failed to catch the preacher.