The Return of Kitty The Hare – The Haunted Quarry

Thanks be to God, I’m with ye all again tonight, though I was between two minds about striking for the road today, I was. But the wild screeching wind and the torrents of rain put an end to my plans for the present, imbeersa. So I must think of another few stories for ye, before I take to my travels once more. 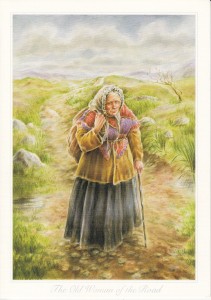 I don’t think I ever told ye about the haunted quarry of Farnoonie; so ye may’s well hear all about it tonight – and a queer story it is, mossa fain, and every word of it as true as that I’m here myself telling it to ye this minnit at old Ballyroe.
It happened many long years ago, but it all comes back to me now, just as if ‘twas only last week it took place.

The townland of Farnoonie lies west of Gougane Barra, shut in between wild mountains and miles and miles from any town. People of the name of Manning ever and always lived in Farnoonie within the memory of man, and at the time my story happened there were two cousins, Stephen and Bat Manning – fine strapping young men, both of ‘em, mossa – living in the south side of Farnoonie, the two farmhouses down in a sheltered glen, with big trees and rocky hills shutting off the northern blasts and the cruel east winds from their comfortable homes, imbeersa.

Stephen and Bat were about the same age – surely no more than twenty, at this time – and though as I’m just after telling ye, they were near cousins, still for all, two black strangers could be less alike than this pair.

Stephen was a tall, lanky, long-faced young man, with small steel grey eyes, deep down under his bushy eyebrows, and they as sharp as needles whenever he looked at you straight.

You’d think Stephen was ever and always brooding over some trouble or other, so you would; and often a whole hour would go by and not one word would fall from his lips.
But molaire, you may say Bat Manning wasn’t like that, why. A jollier, airier, light-hearted boy never lived than the same Battie. Sure, to look into his bright, open, handsome face, with its flashing blue eyes and its sunny smiles, anyone at all could tell that he was as true and honest as the day.

Well, why, but here’s my story for ye; and I won’t keep you up too late over it tonight, if I can help it all, imbeersa.

There was a servant girl, Ellie Moynihan, in Bat Manning’s house, as pretty a colleen og as you could see; and, faix, to tell nothing but the truth, mossa, Ellie was well-descended, so she was, and her people were every bit as good as the Mannings – only, God help us, they were brooke out of their lands and their stock in the bad times, like many another, and forced to quit their own fine old homes and to labour for others for a living.
So, poor Ellie Moynihan came to Bat Manning’s people when he was barely turned fourteen and herself and Bat grew up, I may say, together, so they did, and begannies, when Ellie Moynihan was eighteen, and Bat about two years older, didn’t the pair of ‘em take it into their foolish heads to fall in love with each other, I thank ye, and ye may say there was the divil’s own kick-up at the Farnoonie farmhouse when Bat’s people found out the truth.

Continue reading The Haunted Quarry in our Winning Writers Annual 2016