The Scandal of Wood Quay

Forty years ago, despite massive protests, Dublin Corporation went ahead with the building of new civic offices on a site which had been at the heart of Viking Dublin. Jim Rees recalls a turbulent time in our capital city.

The right to protest is fundamental to democracy, yet we are sometimes very quick to label protestors as shiftless good-for-nothings, dismissing them as ‘rent-a-crowd’. Often, we don’t even bother to find out what their grievances are; we’re more concerned with the inconvenience they cause. 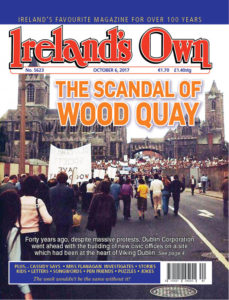 Forty years ago, the streets of Dublin were packed with protestors who didn’t fit the usual image. They came from all walks of life and social backgrounds, united in their belief that our cultural heritage is worth saving.

The economic boom of the 1960s brought not only great improvements in our standard of living, it also instilled in us a national self-confidence. The bleak decades of the 1940s and 1950s, marked by poverty and emigration, were behind us. A brighter future beckoned.

For many, there was no conflict between past, present and future. The birth of the new Ireland did not require the wiping out of our past. There were those, however, who believed that moving forward must entail forgetting or even destroying ‘all the old baggage’ of heritage.

And therein lay the seeds of one of the most remarkable social rebellions Ireland has ever known.

Dublin, like the country in general, was in the throes of economic, social and cultural change. Swathes of the inner city were being cleared of former slums as people were relocated to new suburbs of modern houses.

In its enthusiasm to erase the blight of former slums, Dublin Corporation razed whole streets of eighteenth century buildings. In doing so, they threw the baby out with the bath water. As fine Georgian squares in Dublin today testify, many more architectural gems could have been saved and refurbished rather than simply levelled with a demolition ball.

Ten years later, the same would happen to Viking Dublin.