The Sharing of the Green

No nation on earth except the Irish could concoct movie brilliance with a national C.V. that was either written by a fairy or the creator of Irish stew. How can we share the green through our version of American imagery? Tom McParland examines four relatively contemporary Irish movies that attempted to do just that.

Movies deal in human emotion and speak an international language. But ever since Hollywood gained movie ascendancy after WW1, that movie language has been American. The nearer any movie can speak that language the better its chance of international success.

It’s hard to realise, but once American vastness – prairie, Mojave desert or Monument and Death Valleys – were new to us. Now, because of American movies, they seem as familiar as the Dublin GPO. Seem being the operative word. Movie language doesn’t teach. Its imagery instructs. The greater the imaginary familiarity, the greater the receptivity. 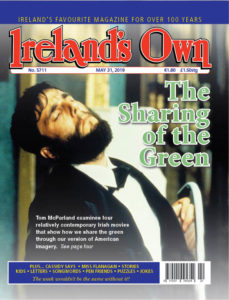 In the old days, American Irish movies or musicals couldn’t stick in our craw because it was America’s craw. But nobody minded. Actors like Jimmy Cagney, Bing Crosby, Judy Garland, June Haver, Thomas Mitchell, Pat O’Brien, Tyrone Power (all as Irish as the fourth of July) we regarded as Irish as Guinness.
Once Irish cinema lights dimmed so did we. Hearts full of goodwill, laughter, song and eyes dimmed with tears which would become crocodiles when the lights came up again.

While in Ireland resting and acting is almost synonymous, in America you could go from resting to renown in one movie. Or become a star through other attributes rather than dramatic ability. Sporting prowess was enough: Sonja Henie, (ice skating) Esther Williams (swimming). Or being a beauty pageant participant: Sophia Loren and Halle Berry, and a war hero: Audie Murphy.

In today’s Ireland movie acting has radically changed (today hams like Joseph Tomelty or Una O’Connor would never make it). After nearly sixty years of RTÉ, actors become actors while in high-chair infancy.