The Summer of 2019 will mark two milestones in cinematic history: the launch, eighty years ago, of the movie described as ‘one of the greatest films in cinema history’, and the death, thirty years later, of its star, writes PAT POLAND

Frances Ethel Gumm was born on 10 June, 1922 in the upper mid-western US state of Minnesota to Frank and Ethel Gumm who ran the local picture house and regularly staged song-and-dance shows on the cinema stage.

Frances had barely passed her second birthday when her mother had her captivating the audiences, emerging from a hat-box and doing a creditable impersonation of Al Jolson. Later, she joined her sisters, Mary Jane and Dorothy, on the vaudeville circuit, billed as the ‘Gumm Sisters’, with their mother accompanying them on the piano. 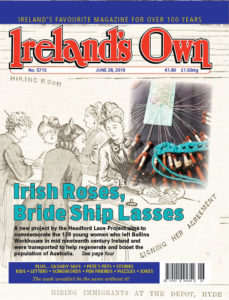 When an impresario introduced them to an audience and was met with howls of laughter, and being billed erroneously as the ‘Glum Sisters’, they changed their stage-name to the ‘Garland Sisters’. Soon after, young Frances changed her name to ‘Judy’ after a Hoagy Carmichael song that she particularly liked.

In 1935, a scout for MGM studios attended the sisters’ show and was impressed by Judy’s performance. Within days, Louis B. Mayer had contracted her on $100 a week without knowing quite what to do with her.

At 13, she was too young for adult roles and too old for child ones. Standing at 4 feet 11ƒ inches and with her homely looks, she enrolled as a pupil at the MGM school with other actresses – including Elizabeth Taylor, Lana Turner and Ava Gardner, all ‘head turners’.

Judy was made to wear uncomfortable caps on her teeth and rubber discs on her nose to give her a more elegant profile.
When, one day, she overheard Mayer referring to her as his ‘little hunchback’, it triggered a lifetime of insecurity about her looks, and indeed, her talent. Henceforth, she required constant reassurance about her attractiveness and ability.
Soon, Judy was starring in the first of over two dozen movies, cast in many different roles, that would make millions of dollars for MGM.

One of her earliest was Every Sunday in which she was cast with the soprano Deanna Durbin; Deanna’s operatic style contrasting with Judy’s ‘swing’ style.