The Sinking of the Pomona

In April 1859 the Pomona was wrecked amidst strong winds off the Wexford coast resulting in the loss of over four hundred lives. The ship was carrying emigrants and cargo from Liverpool to New York. Gale force winds and a navigational error resulted in the loss of the ship.

The Pomona was a clipper ship built in 1856 for Howland and Frothingham in Boston, U.S. She was named after the Roman goddess of fruit trees and had a figurehead of the goddess at the bow. 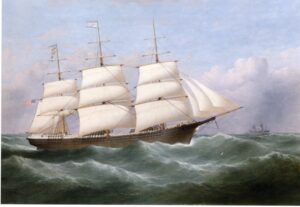 The Pomona left Liverpool on 27th April, 1859. The mood on board is believed to have been jovial at first with music provided by a piper and fiddle player. Initially a fresh wind blew from the south east. This bode well for a speedy journey with the captain remarking that the ship might make New York in seventeen or eighteen days – often it took thirty.

As the ship sailed through St. George’s Channel the winds strengthened. When a lightship at the Blackwater Bank off the Wexford coast came into view the crew mistook it for the light at Tuskar Rock further south. This resulted in the crew turning the vessel westwards, unknowingly heading the ship for the north Wexford coast.

Amidst increasing winds and rain, at approximately 4am the Pomona hit the Blackwater sand bank about five miles south of the Blackwater light vessel and four miles from shore. With the vessel stuck on the bank confusion and panic ensued amongst the passengers. However, some order was restored and those onboard awaited daylight as the ship was bashed by waves and high winds.

At approximately 10am Captain Merrihew gave the order to cut the main and foremast – a procedure often carried out in such circumstances to avert dangers caused by the leverage of swaying masts. However, this was not enough to stop the wind from lifting and pounding the vessel.

The hull was repeatedly damaged and the pumps ran continuously below deck to remove water.
As the tide fell the ship began to move but was pushed easterly over the bank into deeper water. The captain ordered that at least one anchor be dropped. He may have done this in the hope that the anchor would hold the vessel and that the ship may have come round and held on the bank again, enabling more time for rescue.