The Story Behind On Raglan Road

Did you know one of Ireland’s greatest love songs was born from the feelings of unrequited love?

Please join me, Maxi, and my friend Moya on a special stroll around Dublin’s southside. You know Moya, I am sure, from her work as the producer and co-founder of Riverdance. We share a love of poetry, the arts and great writing and it was this connection that saw us ambling in Dublin one day, talking about Patrick Kavanagh and the poem and song Raglan Road.

We started out, as does our story, on Raglan Road.

Patrick, from Inniskeen, County Monaghan, walked to Dublin to pursue his dream of becoming a renowned writer. He got a part-time job in a newspaper office and decided to change his accommodation in Dublin in order to find somewhere that would give him more inspiration as a wordsmith.

The new rooms were on Raglan Road and he was very content with the comfort and the price. Working under the nom-de-plume of Piers Plowman, chosen because of his love of the world of farming and country living, he was happy that he was beginning to make progress in the world of writing in some shape or form as he submitted articles for the paper. 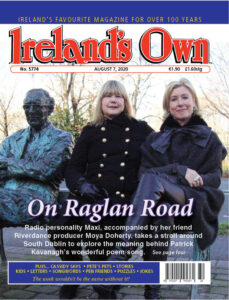 Walking home from work one day, kicking up the amber leaves that always nestled on the pavement in a golden carpet, he noticed a lady. He knew instantly he had been struck by Cupid’s arrow. She was a young beautiful brunette, and he was smitten.

Many mornings found him by the window in his rooms watching out for her. His creative mind began to work overtime. He presumed she was going to university as her trips were regular and timely.
He also noticed she went into town a lot, so he was determined to do the same. His luck held out, and he met her and introduced himself.

Her name was Hilda Moriarty. He told her he was a poet and writer, and she told him she was at university studying to become a doctor and loved poetry. She offered to appraise his work. Patrick was from Monaghan, and Hilda from Kerry. A relationship began. The year was 1947. Hilda was twenty-two and Patrick was forty.

On Raglan Road
On an autumn day
I saw her first and knew
That her dark hair would weave a snare
That I would one day rue
I saw the danger, and I passed along the enchanted way
And I said, let grief be a falling leaf at the dawning of the day.

One of Patrick’s friends in the newspaper office was Benedict Kiely. Benedict, a broadcaster, short story writer, novelist and anthologist, told him he knew Hilda because he had been in university with her.