The Story of Irish-Australian Tom Wills

Eleanor Quinlisk outlines the story of the legendary sportsman who is credited with being his country’s first cricketer of significance and a founder of ‘Aussie Rules’ football.

Thomas Wentworth Wills (19 August 1835 – 2 May 1880) was a man consumed by sport. Born to a wealthy family in the British colony of New South Wales, Tom was the eldest child of Horatio and Elizabeth (née McGuire) Wills. 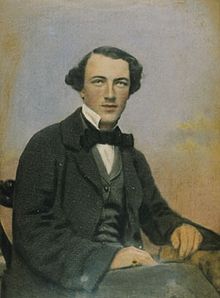 As such, Tom was a third-generation Australian of convict descent: his mother was born to convicts from Ireland, and his paternal grandfather was Edward Wills, an English highwayman, whose death sentence for armed robbery was commuted to transportation, arriving in Botany Bay aboard the ‘hell ship’ Hillsborough in 1799.
Granted a conditional pardon in 1803, Edward would become rich through mercantile activity.

Tom’s father, Horatio, worked from a young age for Australia’s first newspaper, The Sydney Gazette, later in his own nationalist journal The Currency Lad (1832–33), he made the first call for an Australian republic.

As a child Tom lived for a time in a tent with his mother and father in the Grampians, western Victoria, and befriended the local Djabwurrung Aborigines. A lone white boy growing up in the midst of black the local Djapwurrung children, young Tom played with them, spoke their language, learned their dances and songs and played their games.

At the age of 14, Tom was despatched to Rugby School in England, where he became captain of its cricket team and played an early version of rugby football. After Rugby School, he represented the Cambridge University Cricket Club in the annual match against Oxford, and played at first-class level for Kent and the Marylebone Cricket Club.