The words for the Christmas carol we know as Silent Night were first set down on paper in 1816 in the tiny Alpine village of Mariapfarr, Austria. The fame of this composition spread throughout the world, and two centuries later, people are still touched by both the simplicity and the strength of its message,
writes Gerry Breen 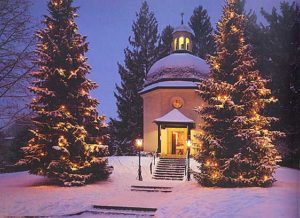 Silent Night, one of the most popular Christmas carols of all time, was written two hundred years ago by a young priest, Father Joseph Mohr, in 1816, when he was ministering in Mariapfarr, Austria. It is not known what inspired him to write this beautiful hymn to celebrate the birth of Christ, but it has now become synonymous with the Christmas festivities.

It has been translated into a hundred and fifty languages and it is sung by countless thousands each December in churches all around the world. It was declared an intangible cultural heritage by UNESCO in 2011.

A year after writing the carol, Father Mohr was transferred to the village of Oberndorf in Austria, and it was in St. Nicholas Church in Oberndorf that Silent Night was first sung on Christmas Eve, 1818.

Books, films and internet sites are devoted to stories about the background to this carol and its enduring appeal, but the real story is a very simple one. On 24th December, 1818, Father Mohr went along to the home of schoolteacher Franz Gruber, who lived in nearby Arnsdorf. Gruber was also a musician and Father Mohr showed his friend what he had written and asked him to compose a melody and guitar accompaniment so that it could be sung at Midnight Mass.

Nobody knows why he needed a new carol at such short notice and it has been claimed that the church organ was broken and that’s the reason for the guitar accompaniment.