SILENT NIGHT: A hymn that has become an endearing symbol of peace, writes BERNADETTE LOWRY

When snow fell softly on Oberndorf, an Austrian village in the Tyrol region, on Christmas eve 1818, no one expected that the simple hymn Stille Nacht, first performed that night, would become an enduring symbol of peace and the most translated hymn in the world.

But this is my story of how that symbolism has lasted. 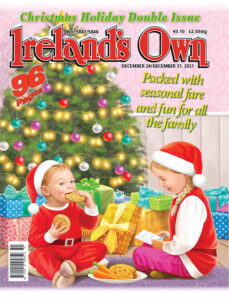 The Tyrol villagers had decorated freshly hewn spruce trees with candles, fruit and nuts as they prepared for the holiest of nights. Soon, bells would peal from Oberndorf’s little church of St. Nicholas, to announce midnight Mass. But, the organ was giving trouble and no matter how hard the priest, Joseph Mohr pumped its pedals he could cajole only a wheeze from it.

Mohr had a natural instinct for music. The illegitimate son of a seamstress and a soldier, he had earned money singing and playing the violin and guitar as a boy. At school, and then at university, he had lived on money he earned as a performer.

Mohr was ordained a priest in 1815 and was posted to Oberndorf in 1817. A shy man he had written a simple poem a years earlier after visiting a poor family in his parish to bless their child. The image of the young mother holding her infant wrapped snugly against the winter cold, captured Mohr’s imagination and reminded him of another birth almost two thousand years earlier, and thus he wrote the haunting lyrics ‘Stille Nacht, Heilige Nacht’ (Silent Night, Holy Night.)

When the organ of St. Nicholas’s broke down that night Fr. Mohr asked his friend, Franz Gruber, a local schoolmaster and more skilled composer than he, to set his poem to music to be sung in the Church at midninght mass.