The Story of The Cliffs of Moher

Kay Doyle explores the magic, mystery and magnificent views of the
Cliffs of Moher in Co. Clare 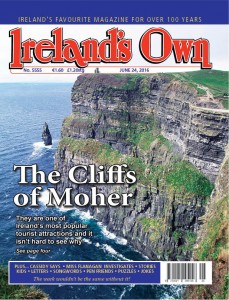 Magnificent they stand, one of the most iconic features of Ireland’s landscape – the Cliffs of Moher. Stretching across eight kilometres along the Atlantic coastline of County Clare, is it any wonder that they are Ireland’s most visited natural attraction with over one million people coming to experience the cliffs for themselves each year?

Despite the cold, the winter sun shone brightly on my visit to the Cliffs of Moher last November. Driving from Ennistimon towards Lahinch and on to the cliffs, now a Signature Discovery Point, in the heart of the Wild Atlantic Way, I couldn’t wait to finally experience what I had only ever seen on postcards and television.

Standing 702 feet at their highest point, on a clear day visitors may be lucky enough to see the Aran Islands and Galway Bay to the west as well as the Dingle Peninsula and the Blasket Islands in Kerry. The Cliffs of Moher translated means ‘the cliffs of the ruined fort’ and although there is no trace remaining of this two thousand year old Mothar fort, Moher Tower stands in its place today.

It is believed the cliffs are over 320 million years old, dating back to when Ireland’s ancient rivers laid down sediments on the seabed to form the rocks of the Cliffs of Moher – sandstone, siltstone and shale. It’s only in more recent times that their unique beauty has been so widely appreciated.

There are accounts dating back to the 1700s in European travel journals, such as John Lloyd’s An Impartial and Accurate Description of the County of Clare in 1780 when he wrote:
“This Mohar is the summit of a very high, stupendous Cliff, … which exhibits a clear Prospect of the gloomy Highlands of EYR CONNAUGHT, the Isles of AREN, of almost the whole Coast of MALBAY, and of the adjacent Country for many Miles; underneath this is another green Pasture gradually declining to the lower Cliff, and which is often covered with the raging Billows of this alarming Coast: On the lower Plain is Hagshead, …it is closely similar to a Woman’s Head, for which it is call’d HAGS-HEAD, a remarkable Point in the Seaman’s Chart.”

In 1897, French writer Madame Marie-Anne de Bovet in 1897 wrote that:
“The Cliffs of Moher surpass in savage beauty all other points of this marvellous side of Clare. Imagine a reach of several miles of wall of black stone rising as high as 600 feet above the ocean, the angles formed like the bastions of a fortress crossed below by sinister caverns, among which may be seen the white wings of myriads of sea-birds.”
Along with the natural beauty of the Cliffs stands O’Brien’s Tower, built in 1835 by Cornelius O’ Brien, a descendant of the High King Brian Ború. Cornelius O’Brien was the local landowner who was ahead of his time in many regards. He believed that the developing tourism would benefit the local economy and bring the people out of poverty.
O’Brien’s Tower was essentially built as a viewing area for 19th century visitors. O’Brien then followed the building of the tower with that of the bridge over the Inagh River and St Brigids National School. In 1837 he was elected Member of Parliament for Clare, a role in which he served for twenty years.

The visitor centre that had been built in 1978 was no longer equipped to deal with this large number of national and international visitors and so in 2007 Clare County Council opened the Cliffs of Moher Visitor Experience. The new centre boasts a state of the art underground visitor centre building and development and extension of the cliff edge pathways, steps and viewing platforms. It is more than equipped to cater for the one million plus visitors passing through its doors every year.