The Story of The Commitments at “30”

Thirty years since it first hit the big screen, Thomas Myler tells the story behind the phenomenally successful film, based on Roddy Doyle’s book about the travails of a Dublin soul band.

When the award-winning English film director Alan Parker began reading a novel in 1989 about an ambitious young Dubliner who takes on the challenge of assembling and managing a soul band in the tradition of 1960s African-American recording artistes, he laughed out loud.

“I was only into a couple of pages at the time and I found it so enjoyable,” he recalled. “The book was all dialogue with very little description, and almost nothing but language.”

The title of the slender novel was The Commitments and it was written by Roddy Doyle, a school teacher from Dublin’s northside. The main character Jimmy Rabbitte, played by Robert Arkins in the movie, places an advert in the local newspaper and holds auditions in his parents’ home. After being deluged by several unsuitable performers, Jimmy decides to put together a band consisting of friends and people he encounters. It all takes off from that point.
“Doyle was able to make his characters as vivid and strong as a dozen pages of purple Joycean prose,” Parker remembered. “As they say in Dublin, he cuts the crap and he writes as he’s heard it – street sharp, gutsy and true. This was a movie I had to make, and make it in Dublin. 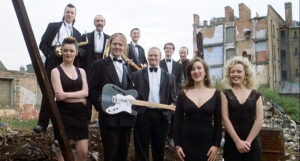 “As it happened, I had been nagging myself for some time to make a film closer to home, and while Dublin isn’t London, it’s a lot closer to home than Los Angeles. I had recently completed Come See the Paradise with Denis Quaid, set in the aftermath of the bombing of Pearl Harbour, and I thought it might be a good idea to make a movie in Dublin.
“More importantly, I wanted to avoid at all times the picture-postcard locales traditionally associated with Ireland and show a contemporary world a little different from the romantic notions. Our aim from the outset was to create an idea of a working-class community that might inspire the sort of heart-felt white soul music that was to become the hallmark of the band.”

The book had come into his possession through the scriptwriting team of Dick Clement and Ian La Frenais, who were responsible for hit shows like The Likely Lads, Porridge, Lovejoy and Auf Wiedersehen, Pet among others.
They approached Parker and gave him a copy. Parker was an established director, with big movies to his credit including Midnight Express, Bugsy Malone, Mississippi Burning, Bird, Fame and Pink Floyd: The Wall. If Parker agreed, they would write a screenplay for the movie. The director gave his approval, leaving the way clear for production.