The Story of the first Rose of Tralee

The information on Mary O’Connor, or the Rose of Tralee as she is better known, is many-versioned, poorly documented, well analysed and like the best of stories told in Ireland over the more than a century and a half since she lived, it has grown legs. ‘The First Rose of Tralee’ is the story that presented itself to me as I researched, writes Patricia O’Reilly.

Mary O’Connor lived with her father, mother, two sisters and brother in Brogue Lane, the heart of the shoemaking industry in Tralee, and kept house. Her father, Willie, was a shoemaker with a good reputation and a constantly full order book, but he had little business acumen and was known to be a bit too ‘fond of a sup’.

Despite her mother Nora working as a dairymaid at West Villa, the family lived a hand to mouth existence, as did the majority of the population in the town. Poverty was endemic, and the county plagued with mini-famines and outbreaks of typhus and cholera. 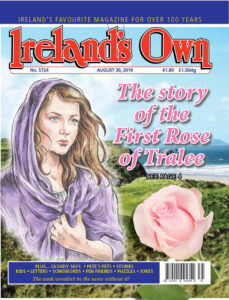 Willie O’Connor considered it was ‘ way past time Mary was married’. He wasn’t shy about expressing his opinion to his 17-year old daughter when they were alone in the cabin. Although Mary dreaded the life of constant pregnancies and ongoing poverty endured by her mother and the other women on the Lane, she saw no way around it.

During the early 1840s Daniel O’Connell was at the height of his appeal, rallying for Repeal of the 1801 Union between Ireland and Britain. When Mary came upon one of his rallies she listened as intrigued as she was dubious by his promises that Repeal would bring ‘happiness and riches, and’, as he put it, ‘all that you desire and strive for!’

Her attention switched to the handsome young man who jumped up and stood alongside O’Connell. She thought it might be Master William Mulchinock from West Villa.

The Mulchinock family lived in style. When Michael Mulchinock died during the early-1830s his widow Margaret took over the running of the businesses – a profitable farm, dairy and several commercial interests in the town, including a hardware store and a drapery business on the Mall that William ran with singular success, although at the time he was devastated at having to have to give up his dream of being a poet and even more devastated to discover his facility for verse had disappeared.
Margaret set up a soup kitchen, campaigned for a workhouse, and was involved in charitable works. She paid close attention to the doings of her family, raised them to be apolitical and planned that they would make happy but socially expedient marriages.

When Nora became too ill she sent Mary to the big house in her place.

Mary, considered too inexperienced for work in the dairy, was started in the kitchen as a skivvy carrying water from the outside pump, peeling vegetables, scrubbing and cleaning. It wasn’t long before she was aware of the striking differences between living on the Lane in poverty and in luxury at West Villa.

‘The history of Brogue Lane was buried deep within Mary, a bloody splinter in her soul … but the thought grew and lingered that, perhaps, she could better herself.’ She dreamed of becoming a teacher.