The Timeless Wonder of Santa Claus

This Christmas Eve, like every other Christmas Eve for centuries, millions of children around the world will eagerly anticipate the arrival of this kind old man and his sack full of gifts. Tom McParland looks at the joy Santa has brought through the ages.

Has there ever existed any kid in the universe who disliked that avuncular, red-suited bearded figure whose Greek shorthand name – Santa Claus – sounds to Irish children as homely and familiar as soda bread?

His single purpose – like that of some benevolent relative – was to appear in the dead of winter to fulfil children’s wishes. Yet remains, long after the passing of childhood, beloved.

In retrospect it seemed as though tunes, Winter Wonderland or Santa Claus Is Coming to Town (both written in 1934) played forever on Yuletide radio. Or at least enough times for them to echo continuously in our brains. Whether pre- or post-rock’n’roll, nobody ever complained of a splitting headache. To object to such secular sacrilege would’ve seemed tantamount to complaining about Christmas.

Santa Claus Is Coming to Town seems as though it’s been around forever. Particularly appealing is its musical nudging that children aren’t the only ones making Christmas lists: He’s making a list/He’s checking it twice/He’s gonna find out who’s naughty or nice – Curiously, Santa’s ideas of bad and good miraculously coincide with Mum’s – He knows if you’ve been bad or good/So be good for goodness sake… 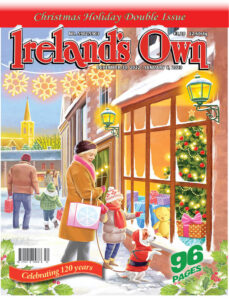 But happily, like real parents Santa never makes gift-giving conditional as his charges instinctively know. Christmas will be just the same as last year and the one before. His sleigh will rattle and swish over the rooftop and he’ll find some way to force his bulk down the skinniest of chimneys.

Santa must make this scurrying dash because he knows that children are making the even faster dash to adulthood. And while all children will remember insomniac Christmas Eves, none will recall being wakened or awake when Santa visits. It is this expediency that makes Christmas time-honoured.

The idea of doing strangers an act of kindness (or chesed, pronounced kess-said) is a vital constituent of Jewish faith. A favourite Talmudic name for God is Rachmana, ‘the Compassionate One.’ Every act of human chesed is an imitation of the benevolence of God. So, in keeping with the mystery of His endless benevolence, the anonymity of the gift giver is as important as the gift itself. And certainly Santa ticks all these boxes.

Santa Claus was based on traditions surrounding the historical Saint Nicholas (a fourth-century Greek bishop and gift-giver of Myra in present-day Turkey). The English figure of Father Christmas and the Dutch figure of Sinterklaas are also based on Saint Nicholas.

The Ho, ho, ho! booted figure carrying a sack containing children’s gifts became popular in America in the 19th century due to the 1823 poem A Visit from St. Nicholas which describes Santa thus: When what to my wondering eyes did appear/But a miniature sleigh and eight tiny rein-deer/With a little old driver so lively and quick/I knew in a moment he must be St. Nick.