The Tragedy of America’s Most Beautiful Girl

From a cheap New York lodging house, on Christmas Eve, a woman’s body was removed to hospital. When police searched the room they found as her only assets three ragged dresses, a large scrapbook recording the glories of better days and a bottle containing “about two fingers of gin”. Of the great and rich, the social butterflies who were glad to know her such a short time ago, not one appeared to rescue her from Bellevue morgue, until her mother in St Louis heard and sent for the body of her child. 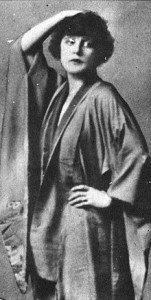 That scrapbook of Julia Bruns told one story of fame and fortune; the $9 dive she died in told another.

Garage worker Charles Brile kept a roof over her head, supplied her with the little food she ate and, above all, the vast amount of gin she craved.

To Brile, who had no money left to bury Julia, she was the fallen angel who crashed at his feet – and from what a height Julia Bruns crashed.

Born March 18, 1896, in St Louis, Missouri, Julia got her break aged 13 when playwright Zoe Akins offered her a role in Alice in Wonderland. Julia ran home to ask; her mother said no; so Julia ran back and said yes.

Julia’s father died, so she left school and worked as a restaurant cashier. Later, Julia said goodbye to all her friends, showed them her new dresses and ticket to New York and, despite opposing Julia’s dramatic aspirations, her wished her success and happiness.

In 1913 Julia landed a minor role in American Maid. The show flopped, but sitting in the third row was illustrator James Montgomery Flagg with his wife. “What an extraordinary, gorgeous girl!” they gasped. Flagg labelled Julia the most beautiful girl in America. She modelled at Flagg’s studio. News articles appeared. She became the “queen of the magazine covers”.

Julia had a house in ultra-fashionable Sutton Place, a flat in London, an apartment in Paris. She crossed and recrossed the ocean.

Her name flashed on billboards. She kept a Rolls Royce in London, a Packard with a uniformed chauffeur in New York. She yachted down to Palm Beach, wore gowns from Madame Frances and Jenny, jewels from Tiffany and the Rue de la Paix. She had admirers everywhere.

In 1919, actor Arnold Daly brought Julia to France to film Quand On Aime. Here she first took drugs and it began to affect her performance. At the studio, she overdid her lines.
The director, thinking her full of champagne, told her to go home and reshoot the next day.
Daly discovered her secret and Julia cried, told him that she would never touch cocaine again, she was ready to return to filming—but she knew it was all a lie. Somehow, they completed the film.

She became difficult to handle at rehearsals, often disappeared. She promised to quit dope but instead quit work. Her fiancé lavished gifts on her. With him, she was seen at famous clubs. In 1921, her addiction exposed, friends drifted away. Her fiancé, broken-hearted, left, and Julia allowed her savings to slide like water through her fingers.

Whilst seeking treatment at a health resort, Julia discovered her addict friend dead in the neighbouring bed and fled. She was broke. No theatrical engagements, no income. She sold and pawned everything: piano, furniture, the few jewels that remained.

She rented out the top floor and weeks later her doorbell rang and the door pounded – it was the law. $4,000 worth of her tenant’s jewellery was retrieved from pawn shops. Detectives enquired about bail and Julia rattled off a list of celebrities who would cover bail—the police rang through the list and got a ‘nothing doing’ from them all.

Police transported her to jail in a patrol wagon, along with drug addicts, pickpockets, drunken brawlers. Not one friend came forward with bail. Days later someone, rumoured to be her ex-fiancé, provided bail. Penniless, she lost her house.

In 1926, finally having broken the addiction, she wrote heart-rending newspaper articles chronicling her addiction and quest for a cure.

From her private scrapbook the papers printed Flagg illustrations and autographed photographs of famous actors inscribed to Julia – the life that had now disappeared.
Under an alias she played small parts, but substituted alcohol for drugs. Day after day she sat in dingy speakeasies, drinking herself, with cheap gin, into a stupor of forgetfulness.

And there she met Charles Brile. To other drinkers just a drunk, to him she was a fallen star. He took her home to his lodging house, paid for treatment, but on Christmas Eve, 1927, she died. Her coffin was placed on the midnight train, bound for home, her last trip to St. Louis. Her final admirer had in his pocket just the price of another bottle of gin, but instead he bought a lily and laid it in her hand.