Of all the bereaved widows of the 1916 leaders, the most tragic, certainly, was Muriel, wife of Thomas MacDonagh, and this, despite the fact that her four years with her Tipperary-born husband were radiantly happy. If a marriage was ever made in heaven, this most certainly was it.

One of the five daughters of a Catholic father and a Church of Ireland mother, Muriel Gifford was born in 1885 at 8, Temple Villas, Rathmines, Dublin, into an upper middle-class family. Her Parents were Unionist to the core, while her seven brothers, despite their leaning towards socialism, could scarcely be called Irish nationalists.

Yet, although all of the Gifford girls, were raised in the religion of their Mother, four eventually converted to Catholicism and all five became fervent Nationalists. 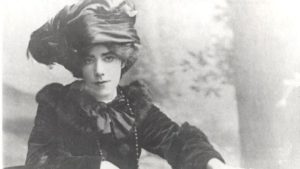 Thomas MacDonagh was born in Cloughjordan, Co. Tipperary, on Saint Brigid’s Day, 1878. He was educated locally and at Rockwell College, Cashel. His Parents hoped that he would become a Priest. However, on discovering he had no vocation for the religious life, he chose a career in second-level teaching, spending some years at St Kieran’s College, Kilkenny, and St Colman’s College, Fermoy.
He involved himself in Gaelic League activities and, through visits to the Aran Islands, quickly acquired a fluency in the Irish language.

In 1908, he was appointed assistant principal of Padraic Pearse’s Scoil Éanna. He studied as a night student at UCD, graduating with a BA in 1910 and an MA a year later. He was then appointed full-time lecturer in English at UCD. He resided at Grange House Lodge, Rathfarnham.

A talented poet, four volumes of his works were published prior to 1911. Thomas MacDonagh met Muriel Gifford, a very attractive and highly talented woman, seven years his junior, in 1910. For Muriel, it was love at first sight, even if her parents strongly disapproved of the Catholic republican, MacDonagh. Despite family objections on both sides, the couple wed on January 3rd, 1912, at a temporary Chapel, which was later replaced by the Church of the Holy Name, on Beechwood Avenue, Dublin.
The Catholic Church rules on mixed-marriages in those days were very rigid, particularly if the non-Catholic would-be spouse did not convert. Muriel Gifford had no intention of joining the Catholic Church. So it was that the Church marriage ceremony was a small and very private affair, with no watching congregation.

Apart from the Priest and the wedding couple, only two witnesses, the bridesmaid and the best man, were invited to the ceremony.

Padraic Pearse had been asked to stand in as MacDonagh’s best man, but perhaps because he forgot the exact time of the ceremony, or maybe, due to his sometimes absent-minded nature, Pearse never turned up.

In despair, the Priest exited the Church. On observing a man clipping a hedge nearby, he ushered him into the Church where he soon fulfilled his duty as witness.

Almost 11 months later, the MacDonagh’s first-born child, Donagh, was being christened in that same Church. Pearse had not been asked to attend, but turned up, never-the-less, where-upon MacDonagh retorted, “Well, Pearse, you may have missed the wedding, but at least you turned up in good time for the Christening!”

The four years of Muriel Gifford’s marriage to Thomas MacDonagh were, for both, the happiest of their lives. They lived, initially, at 32, Baggot Street, but later moved to 29 Oakley Road, Ranelagh. Two children were born to the couple – Donagh on November 22nd, 1912 and Barbara in 1915.