Cian Manning recounts Tom McGrath’s incredible story of his father’s conscription into the British Army, his escape from a prisoner-of-war camp in Poland, his daring journey across Europe and subsequent recapture – and the devastating news that awaited him in England. Tom’s research also led him to discover that his mother also carried a heartbreaking secret.

Thomas ‘Toddy’ McGrath, the author of Unspoken: A Father’s Wartime Escape. A Son’s Family Discovered, was born in Cork City in the summer of 1952. Young Toddy grew up in Waterford City and lived at the popular Lido Café (below) run by his Uncle Tom and Aunty Lil.

This esteemed eatery was once frequented by the legendary Roy Orbison when he performed in the city by the River Suir. The city was a-buzz with the craze of the showband era, Orbison played the Olympia Ballroom on Parnell Street in 1965 while the local soccer team would go on to play teams like Manchester United and Glasgow Celtic in Europe in latter years. 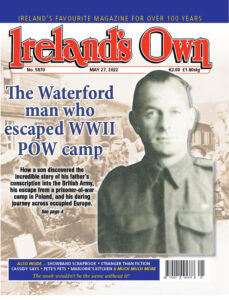 Those celebrities of the era, when in Waterford, visited the Lido Café. Elizabeth ‘Lil’ Vaughan had bought the café on Barronstrand Street in the late 1940s and made it into a huge success.

A happy childhood was filled with fun and adventure, be it picking cockles or discovering sixpence pieces in the sand of Tramore Strand. Toddy attended the local St. Declan’s school and passed his spare time watching matinee idols at the Savoy or camping with the scouts.

At 13 years of age, Toddy would drop the pet name by which he was known in Waterford when he attended Rockwell College in County Tipperary. His time as a boarder was noted as helping ‘to knock the corners off him’, young Tom’s innocent adolescence was shattered when he turned 14. First Lil died, aged 53, in November 1966 and would be followed by the elder Thomas eighteen months later when he died in February 1968.

SECRETS WE KEEP, TALES WE TELL TO DISTRACT

The bedrocks of young Tom’s life had departed and the place he had known as home in the Lido was sold. If these events weren’t earthshattering enough, teenage Tom was told by a member of staff who worked in the café that the people he referred to as ‘Uncle’ and ‘Aunty’ were actually his parents. Though in his heart he knew this all along.
However, this is only the beginning of Tom’s journey to discover the lives of his parents who had departed too soon for him to ask the questions he now yearned to be clarified.
Perhaps it’s apt that it was the Big O who visited the café where Tom grew up, as I’m sure he felt a great deal of loneliness after the death of his parents. Even the lyrics: Only the lonely Know the heartaches I’ve been through…
seem more than appropriate for the stories that Tom discovered but never heard spoken by the people they concerned – his father and mother.

After completing a BA in psychology and philosophy, Tom later married Bilbao-native Asun Marti in September 1976. They had first met at a dance in the Haven Hotel in Dunmore East on 12th July 1969, and they subsequently made Ireland their home. Tom studied to become a solicitor while Asun began a PhD at University College Dublin. Together they would have two children, Eric and Cristina.

Always looking to resolve the unknown elements of his family history, Tom believed that “When we had children, the experience of being a father made me think more about my own early life and about my parents. I wanted to know about their lives, to understand who they were and to find out about their respective family backgrounds.”
The quest to fill in these gaps surrounding his children’s Irish heritage spurred Tom on to explore this history with his family.

Tom aptly writes that “So much of our lives are unspoken. If we don’t speak into those silences, others will.”
His book is an attempt to remember their lives, record their stories and imagine to fill in the blanks that remain on paper but can be deduced from his research and of the time he spent with Tom and Lil.