David Mullen looks back on the life and legacy of Cyril Cusack, one of Ireland’s best-known and most talented character actors whose four daughters went on to be famous actors in their own right.

When Cyril Cusack died in October, 1993 it marked not just the end of a life well lived, but of a career in acting which spanned some 75 years. During his seven decades in the limelight, Cusack forged a career which saw him become one of Ireland’s best-known faces internationally, working with some of the world’s greatest film-makers as well as alongside some of Hollywood’s biggest stars.

In his private life, Cusack was the scion of a dynasty which would, in turn, produce a number of very fine actors in its own right, all of whom continue to have successful careers today. 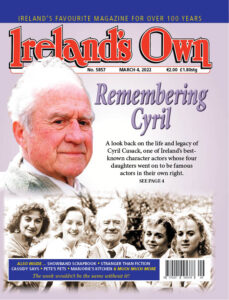 Cyril Cusack was born in 1910 in Durban, South Africa to a Birmingham-Irish father, James Cusack, a mounted policeman, and an English mother, a Cockney actress named Alice Violet Cusack (née Cole). Both parents separated while Cyril was still a small boy, and he went to live with his mother, first in England and then in Ireland.
Alice and her partner, the actor Brefni O’Rorke, joined a theatre company, and it was through this that Cyril got roped into the family business, making his first stage appearance at the age of seven and his film debut aged eight.
This first brief cinema role was in the 1918 silent film Knocknagow in which he played the young son of a character in turn played by his step-father.

In the early 1930s, he studied at UCD but soon dropped out and, in 1932, joined both the Abbey and Gate theatres, appearing in scores of productions, notably in the plays of Seán O’Casey.

1935 saw Cusack’s film career begin in earnest with a part playing an IRA member in an adaptation of Frank O’Connor’s Guests of the Nation. He may not have had leading-man credentials, but he was soon solidly and consistently employed as a character actor in British films alongside stars such as Dirk Bogarde, David Niven and James Cagney.

One particular highlight of Cusack’s early career was Carol Reed’s 1947 film noir Odd Man Out starring James Mason as an IRA man on the run in Belfast — today regarded as one of the finest British films of its era. In 1957 too, John Ford, the legendary Hollywood director, cast Cusack as a policeman opposite Noel Purcell in the episodic Irish film The Rising of the Moon.

This period saw a lot happening in Cusack’s personal life. In 1945, he had married a fellow actor, Maureen Kiely, who was, herself, a leading light in the Abbey and Gate theatres. Together, they’d have five children, starting with Paul in 1946 followed by Sinéad, Sorcha, Niamh and Pádraig in 1948, ’49, ’59 and ’62 respectively. While the two boys would have distinguished careers as theatre and TV producers in their own right, it was the girls who would become best-known to film and TV audiences.