Since it opened in August 1987, The Donkey Sanctuary Ireland has transformed the lives of over 3,500 abandoned and neglected donkeys, turning them into happy healthy animals, writes Susie Kearley.

The Donkey Sanctuary in Ireland celebrates its 30th anniversary this year, with a big celebration and Open Weekend on 26-27 August at their Hanningan’s Farm site in Liscarrol. There will be a dog show, bubble soccer, craft stalls, music, children’s activities, food stalls, a raffle, donkeys, and lots of fun for everyone. 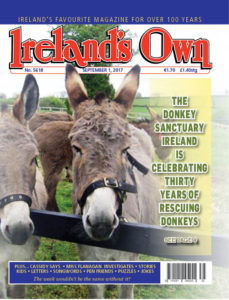 The event will celebrate the anniversary of the opening of The Donkey Sanctuary Ireland on 1 August 1987. It was founded by Paddy Barrett, an ISPCA inspector who’d grown up inspired by his father, who kept donkeys and helped animals in his own role working for the ISPCA.

Triona O’Mahony from the Sanctuary says: “In 30 years, we’ve transformed the lives of over 5,300 abandoned and neglected donkeys, turning them into happy, healthy animals, with secure futures. We’ve also developed an education and training programme in donkey care (essential for anyone looking to rehome one of our donkeys), a CPD course for vets and equine dentists, and we’ve launched animal therapy programmes to help people with physical or mental health challenges; the interaction with donkeys can increase self-esteem and help people develop new skills.”

So how did it all begin? Back in 1981 Paddy took over his father’s farm and started bringing feral donkeys home. He was increasingly coming across donkeys who’d been abandoned on boggy land, across the west of Ireland. They were in bad shape, with terrible foot problems, and he was overwhelmed by their plight – he wanted to help. He took them to the farm, nursed them back to health, and watched them recover, then ensured the rest of their lives were spent well looked after and happy.