In 1996 a film was to emerge with little fanfare from Australia with an unknown leading man and a first time film director. It was Shine a bittersweet biography dealing with the pianist and real life character Peter Helfgott. It was to sweep the boards in awards from the Academy Awards to the BAFTAs and got extremely positive reviews.

On reading the script or the biography of Peter Helfgott the story line sounded depressing. It included Nazi oppression, strained paternal relations and prolonged bouts of mental breakdowns and periods in institutions. It had all the ingredients of a gloomy evening at the cinema, but when the tale was eventually portrayed on the screen it was a story of triumph over adversity and made an amazing impact. 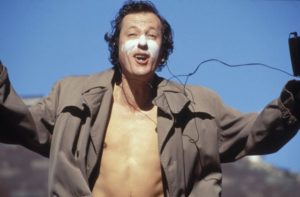 The screenplay by Jan Sardi was based on a story by Scott Hicks who also directed the film, his first assignment as a film director. Hicks had been born in Uganda and had worked for two decades in Australia on documentaries, shorts and television.

The British actor, Bob Hoskins was the first choice to play the role of Peter Helfgott, but he declined it. Dustin Hoffman also expressed an interest in playing Helfgott, as his music and life story had both moved him.

Finally, after all the speculation and the names of numerous other actors, the Australian actor, Geoffrey Rush was selected for the coveted role. In reality he had learned the piano as a child up until the age of fourteen. He then took up piano lessons again thirty years later specifically for the film.

He also acted as his own hand double for the scenes. Normally in films an actor would give the impression of playing and the close up of hands would be a real pianist.
The young Helfgott was played by the gawky looking Noah Taylor. There was a strong supporting cast headed by Googie Withers, Lynn Redgrave as Gillian, Sir John Gielgud as the crusty Cecil Parkes.

The film was shot on a budget of $5.5 million on location in Sydney, Adelaide, South Africa and London over a two-month period. The early stages of the film were based on fact.

The story told of child piano prodigy, David Helfgott whose musical ambitions generate friction with his overbearing father, Peter, who was a concentration camp victim. When Helfgott travels to London on a musical scholarship, his career as a pianist blossoms.

However, the pressure of his newfound fame, coupled with the echoes of his tumultuous childhood, conspire to bring Helfgott’s latent schizophrenia boiling to the surface.

He spends the next twenty years in and out of a number of mental institutions and in various stages of depression. He receives electric shock treatment and is banned from having any contact with a piano. Then, in later life, a visit to a wine bar accidently brings him into the limelight once again. He is introduced to the owner Gillian. They fall in love and with her support he stages a well-received comeback concert.
The film made a compelling, powerful evenings viewing, with no emotion untouched.
The reviews were overwhelming positive. The following are a sample: ‘Shine has a story to reckon with and a powerful performance.’ ‘Intense, gripping mental-illness music drama.’ ‘I declare Shine to be the best film of the year.’ ‘Inspiring, memorable cinema.’

The plaudits for Geoffrey Rush flowed in including ‘one of the best actors working to-day undoubtedly delivering a powerful worth watching performance.’

Rush won the Academy Award and BAFTA for Best Actor for his powerful portrayal. He also won a Golden Globe as Best Drama Actor. This was the start of an impressive film career for Rush. In 1998 he appeared in three films – Les Miserable, Elizabeth and Shakespeare in Love for which he won his second Academy Award for Best Actor.

Following on from the success of Shine director Scott Hicks was offered many big projects. His first Hollywood film was Snow Falling on Cedars (1999). This was followed by Hearts of Atlantis two years later.