This week’s classic US TV Series – The A-Team

One of the most exciting action-packed series ever was ‘The A-Team’. In its one hour of television every week, viewers saw car chases, fighting, guns, searches, rescues and a battle between good guys versus bad guys. 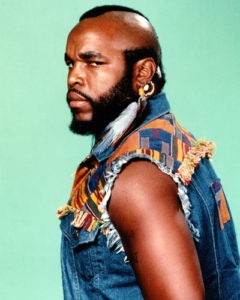 It began on RTÉ in summer 1983, just a couple of months after it premiered on the NBC network in America, and it quickly found an audience.

The storyline featured a motley crew of ex-Vietnam veterans who lived in the Los Angeles underground on the run from the law for a crime that was committed when they were in Vietnam.

The crime ‘The A-Team’ were accused of, involved the robbing of a bank, while they were in Vietnam. The plan had been to use the robbery to end the war, but unfortunately their commanding officer was killed, and the team was left accused of a crime, rather than acting under orders.

However, now that they were back in America, they hired themselves out soldiers of fortune, and the tagline of the hit series was: “If you can find them, maybe you can hire the A-Team.”

They were made up of veteran movie actor George Peppard, who had been sacked after completing the pilot of ‘Dynasty’ in 1980, where he played the original Blake Carrington. Peppard played Col. ‘Hannibal’ Smith on ‘The A-Team’. Actor, Tim Dunigan portrayed Lieut Templeton ‘Face’ Peck in the pilot episode, but because he was deemed too young looking to play a Viet Nam vet, Dirk Benedict formerly of ‘Battlestar Galactica’ was cast instead.

Dwight Shultz played Captain Howling ‘Mad’ Murdoch’ and Melinda Culea played Amy Allen, and both were largely unknown to the public. However from Episode 1, it was obvious the star of the show was going to be ‘Mr T’, who played Sgt. BA Baracus.
Mr. T had just completed a high profile role as a boxer in the movie, ‘Rocky 111’ with Sylvester Stallone. Mr. T had built up such popularity from the Rocky role that Stephen J. Cannell, writer of ‘The A-Team’ wrote the BA Baracus character especially for him.
The characters most popular gig usually involved them helping out those who were downtrodden by thugs. It was all done with plenty of action, and fighting.

The unforgettable catchphrase of the series, “I love it when a plan comes together,” was always uttered by Hannibal.

The A-Team was a ratings hit and was in the top 10 for its first three years on the air in America. It also clocked up three Emmy nominations for sound editing. 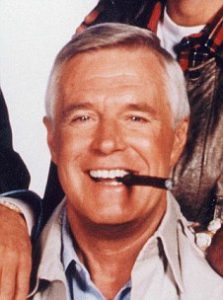 There was much tension on the set and it is universally believed that it was caused by Peppard. The other cast members accepted Mr. T as the star of the show, but Peppard couldn’t. He also made it known that he wasn’t happy with female members of the cast, because he believed they weren’t relevant in such an action show.

Melinda Culea was fired after the first year, and her replacement Marla Heasley only lasted a few episodes. The press at the time reported the unhappiness between Peppard and the female cast members, and Marla Heasley revealed more about it in recent interviews.

Mr. T was loved by the press and fans, and he was even given a cartoon series after having just completed a couple of episodes of ‘The A-Team’. Peppard hit the roof when he found out that Mr. T was the highest paid member of the cast.

Ratings continued to be good for the first three seasons, but the storylines of the good guys helping out the poor downtrodden guys seemed to be repeating themselves. The series slipped down to a bare No. 30 by the end of the fourth season, so producers decided to revamp the series.

Veteran actor, Robert Vaughn from ‘The Man from UNCLE’ was cast as General Hunt Stockwell. Stockwell promised the A-Team a pardon for taking part in dangerous missions, much different than they had done in the previous seasons. While there had always been comedic elements in the series, this fifth season was the darkest, with nobody really knowing Stockwell’s real motives.

However, the series completely sank in the ratings, barely making the Top 50. The ideas for the fifth season were good, but they came too late in the day for to save ‘The A-Team’ from cancellation.

Some years later there was talk about an A-Team re-union movie where all the loose ends about Vietnam and their pardon would be tied up, but unfortunately George Peppard died in 1994, so the idea was dropped.

A feature film of ‘The A-Team’ was released in summer 2010, and featured Liam Neeson as Hannibal and Quinten ‘Rampage’ Jackson in the Mr. T role of BA Baracus. It wasn’t a major hit at the box-office.