Thomas Kettle – the writer and Home Ruler died 100 years ago

Thomas Michael Kettle was born in Artane, in North County Dublin, on the 9th of February, 1880. He was the seventh of twelve children born to his parents, Andrew Kettle, and his wife Margaret McCourt. 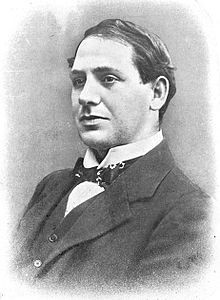 His father, Andrew, was prominent in agrarian politics. He had been active in The Tenant League in the 1850s, and, later, in 1879, he presided at the first meeting of The National Land League. He was also a staunch supporter of Charles S. Parnell, and, in 1881, he was imprisoned for his land agitation.

This provided the political environment in which the young Thomas Kettle was reared. He was educated by the Christian Brothers in North Richmond Street, Dublin, before being sent to the Jesuit Clongowes Wood College in County Kildare. Then, in 1897, he enrolled in University College, Dublin, where his fellow students included Patrick Pearse and James Joyce. He proved to be a very popular student.

His skills as an orator (or public speaker) led to his election as Head of the College Debating Society.

Then, when the Boer War broke out in South Africa in 1899, he distributed pro-Boer propaganda and anti-recruitment leaflets in the belief that the British Empire was based on theft.

The following year, 1900, he was prevented from sitting for his final exam by ill-health, probably a nervous breakdown. However, a tour of the Continent appears to have cured this, and when he came home, he passed his final exam in 1902.

He then studied law, and qualified as a lawyer two years later. However, he rarely practised this profession, and devoted most of his time and energy to political journalism.
He was an outspoken supporter of the Irish Parliamentary Party, and his political journalism and other activities brought him to the attention of its leader, John Redmond. As a result, in 1906, he was invited to contest the Tyrone East by-election, which he won by a margin of eighteen votes. And, while an MP in the House of Commons, his skills as a speaker earned him a fearsome reputation for sarcasm.

He also went on a speaking tour of the United States where he promoted the cause of the Irish Parliamentary Party, and successfully raised funds.

In 1908, he was appointed Professor of National Economics in University College, Dublin and two years later, in 1910, he quit the House of Commons.

Unfortunately, around the same time, he began to earn a well-deserved reputation as a heavy drinker, which eventually caused his brief confinement in a private clinic in Kent, England.

In 1913, he supported the Dublin strikers during the bitter ‘Lock Out’ and tried to negotiate an agreement between the strikers and their employers. But, these efforts were unsuccessful, due, in large measure to turning up at an important meeting obviously drunk!

As for his politics, his priority was Home Rule (or, an Irish Parliament in Dublin which would be separate from the London Parliament). Therefore, for Kettle, every other cause was secondary, such as Higher Education for Catholics of votes for women.
To further the cause of Home Rule, he became heavily involved in the Irish Volunteers, whose principal aim was the securing of Home Rule.

And, in fact, he was in Belgium in 1914 buying arms for the Irish Volunteers when the German Army invaded during the opening stages of the First World War.

He was outraged by the German destruction of the ancient University Library of Louvain (one of the famous ‘Irish Colleges’ which trained Irishmen to be Catholic Priests during the time of the Penal Laws).

He was also convinced that German-Prussian militarism was the deadliest enemy of European civilisation. Therefore, on his return to Ireland, he joined the British Army, with the rank of Lieutenant.

But, because of his ‘ill health’ (in reality, his heavy drinking), he was not given a command or sent into action. Instead, he was assigned duties as a Recruiting Officer.

Then, in 1916, the Easter Rising broke out, followed by the executions of the ring-leaders. Kettle prophesied – correctly – that the executed leaders would go down in history as heroes and martyrs, while Irishmen who served in the British Army (like himself) would be deemed traitors.

He also realised that the executions had put paid to his dream of a free, united Ireland in a free Europe.

Bitterly disappointed at the drastic changes in Ireland following the 1916 executions, he insisted on being sent to the Front.

And, it was here, during the Battle of the Somme, that he was killed in action on the 9th of September, 1916, one hundred years ago.