FRANCIS KAYE recalls the anticipation and then the simple pleasure of  getting the weekly comics like the Dandy and the Beano, the staple diet of so many Irish childhoods

Thursday evening was the big one in our house in the mid-1950s. Football training? No. Irish dancing classes? Definitely not! Thursday afternoons was when ‘the comics’ were delivered to the ‘paper shop!

When our mother came home from town with the shopping, her bag was descended on by myself and my brother to see if she had got The Beano and The Dandy!

The two comic papers, published weekly by Dundee publishers, D.C. Thompson and John Leng, heralded the coming of the weekend and they were read, over and over on Thursday evening and throughout the weekend. 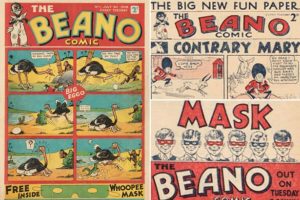 Both were printed on newsprint and had sixteen A4 pages, four in full colour, eight in spot colour and four in black and white. The Beano featured Biffo the Bear on its cover and Korky the Cat graced the cover of The Dandy for decades.

The stories were a mix of one-off cartoon strips and serials, the latter usually ending on a cliff-hanger so that next week’s issue would be hugely anticipated.

On the walk to school on Fridays, the stories would be eagerly discussed with school friends. Beano favourites included Little Plum, a little Red Indian boy who always got up to mischief on the reservation and Lord Snooty, a rich boy who lived in Bunkerton Castle with his Aunt Matilda. His pals seemed to live there too. They included twins Snitch and Snatch, Lanky Liz, Big Fat Joe, Doubting Thomas and a black girl named Polly. Snooty’s sworn enemies were The Gasworks Gang.

Rodger the Dodger was another Beano regular. He spent all his time dreaming up ways of dodging homework and household chores. Minnie the Minx was ‘the world’s wildest tomboy’ and Jonah was a sailor who brought disaster to every ship on which he sailed.

Dennis the Menace was the longest-running character in the history of The Beano, appearing first in 1951. He replaced Biffo the Bear on the weekly cover in 1974 and is still there, with his dog Gnasher, in 2016.

The Bash Street Kids strip first appeared in The Beano in 1954 as ‘When The Bell Rings’. Their antics would convince any would-be teacher to pursue a different career!
Some other Beano comic strips included The Three Bears, Rip Van Wink, Uncle Windbag, Pansy Potter, Scrapper and Grandpa. 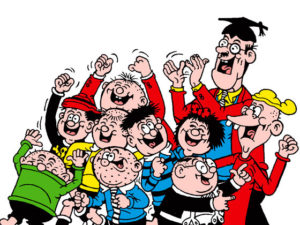 Serials and adventure strips also appeared weekly in The Beano. Popular ones were The Shipwrecked Circus, Jimmy and his Magic Patch, Jack Flash, who could fly with the aid of tiny wings on his ankles, all three strips drawn by renowned artist Dudley Watkins.
The Iron Fish, Red Rory of the Eagles and Nik O’Lightning all kept us in suspense until the following Thursday!

While I read the Beano first, my brother Jimmy read The Dandy. Then we swapped, with an unwritten pledge not to reveal any of the adventures until we both had read both comics.

Korky, a black and white cat who walked on two legs, graced the cover of The Dandy in full colour. Desperate Dan, another character created by Dudley Watkins, was very popular. He was a cowboy who lived in Cactusville and didn’t know his own strength.
He shaved with a blowlamp and slept on a pillow packed with building rubble. He lived with his Aunt Aggie, his nephew Danny and niece Katey. There is a statue of Dan in Dundee city centre along with one of Beano character, Minnie the Minx. Dan took over from Korky as cover-star in 1984.

One of my favourite strips was Ali Ha-Ha and the 40 Thieves which appeared in colour on the back cover. Ali was the son of the Baghdad Chief of Police and week after week he thwarted the 40 Thieves led by Mustapha Fag (must-have-a-fag!).

Corporal Clott graced both centre pages in full colour. As his name suggests, he was an army corporal who got himself and his colleagues into serious trouble each week.
Dirty Dick just couldn’t keep himself clean and Keyhole Kate had a compulsion to peep through every keyhole she saw, often getting her long nose stuck! Screwy Driver, a kid who was always inventing and making things that often didn’t work!

The Smasher did as his name suggests and broke almost everything he laid his hands on and Freddie the Fearless Fly was a fly who was not afraid of humans. Tin Lizzie was a robot housemaid and her friend was Brassneck, a butler also made of tin.
Winker Watson was a schoolboy who boarded at Greytowers School. He was constantly playing tricks and avoiding school activities much to the chagrin of his housemaster, Mr. Creep. Beryl the Peril was The Dandy’s version of Minnie the Minx. 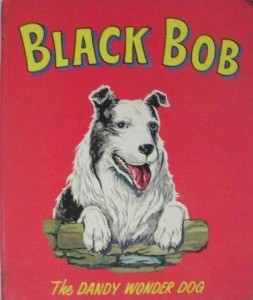 Probably the most popular strip ever published in The Dandy was The Adventures of Black Bob (the Dandy Wonder Dog). Bob was an intelligent border collie owned by shepherd Andrew Glenn who tended sheep in Selkirk in the Scottish Highlands.

Drawn by Jack Prout, the stories ran from 1944 until 1982 and in that time, eight Black Bob annuals were published. I am lucky enough to have all eight!

Some of The Dandy’s adventure series that kept us on tenterhooks until the following Thursday included Quick Nick – The Lightning Lock-picker of London, Dick Whittington and his Cat, Crackaway Jack, Young Drake, Jet Carson’s School for Racers, The Castaway Kidds and Danny Longlegs.

Needless to say, The Beano and Dandy annual hardbacks, which were published every Christmas, were top of the list on our letters to Santa Claus and he never disappointed!
• Look out for an article on The Topper and The Beezer comics in this magazine soon. ÷