Seamus Kelly tells the story of Tolka Row and Orson Welles, and insight into a play that launched a soap

Years before the television serial of the same name hit the headlines in 1964, Maura Laverty’s second play for the professional stage ‘Tolka Row’ (like her first play ‘Liffey Lane’) was very popular at the box office when it first appeared in October 1951 and subsequently.

Both Micheál MacLíammóir and Hilton Edwards had previously written, in the 1940s, to Maura Laverty extolling the virtues of her novel ‘Liffey Lane’. Both expressed their disgust when it was banned. Plays were less likely to be banned than novels which may have attracted Maura, the professional writer, to the genre. The same might be said of her cookery books. 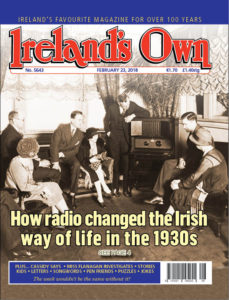 Reviewers liked the play ‘Tolka Row’ when it first appeared but one or two referred to alleged ‘vulgarity’. The ‘Irish Independent’ in 1951 under the heading ‘Another intimate study of Dublin life’ praised Maura for adding ‘another corner to her glowingly original tapestry of Dublin life’. Peggy’s description of her teeth ‘as pearly gates to romance’ was designed to shock.

A more serious theme was the generation gap. “It’s a hard thing to be neither young or old but to be standing between the generation that’s going before you and the one that’s coming after you and to be torn asunder between the two.” Caring for an elderly relative was a timeless theme that many, then and since, can identify with.

I discovered when researching my recent book ‘The Maura Laverty Story from Rathangan to Tolka Row’ that the play was originally to be called ‘Dodder Terrace’. The mention of fishing under Rathfarnham bridge, in the draft that I consulted, was a bit of a giveaway.

Apart from Maura’s popular, relevant and humorous style of writing a major attraction of the play ‘Tolka Row’ to theatregoers was that it starred Micheal MacLíammóir as an ex-canal boatman Dan Dempsey and that it was produced by Hilton Edwards.

Old Dan, like Maura, hankered for the canal boats of Ballyderrig (Rathangan). Denis Brennan played Jack Nolan and Peggy Marshall. The flirtatious Peggy Nolan was played by Laurie Morton with Patrick Bedford in the part of Sean Nolan. Some cast !
Among those who came to see the play was the famed film actor Orson Welles. He attended the play at the Gate on the night of 18th December, 1951. He was no stranger to that theatre. He had cut his early theatrical teeth there.

Christopher Fitz-simon tells in his engaging book ‘The Boys’, that Welles joined the Gate in 1931 and that he appeared in most of their plays in the winter season of 1931-1932. Hilton Edwards said on that night, in December 1951, that it was twenty-one years since Welles had appeared on the Gate stage in Dublin and added that it was a moving experience for him to be back.

Other people’s emotions were stirred too. A group calling themselves ‘The Catholic Cinema and Patrons Association’ objected to Welles presence claiming he was a Communist. Placards carried by the protestors referred to him as ‘Stalin’s star’. Copies of a pamphlet ‘Red Stars over Hollywood’ were handed out.