Music was always part of her life when she was growing up in Co. Laois and becoming an award-winning country music star was a dream come true for her, she tells June McDonnell.

While the lockdown has mostly been a frustrating time for entertainers and musicians, there is one person who was never busier. I’m referring to well-known country singer and radio presenter, Trudi Lalor.

Trudi and her manager-husband, Billy Morrissey, are the brains behind the project Reach Out, but more of that anon. Firstly, I wanted to find out more about Trudi the person, so I chatted to her recently. 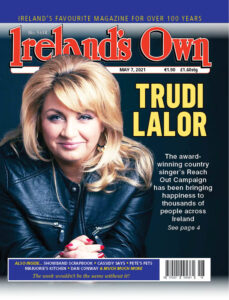 Born in Mountrath, Co. Laois, the youngest of eleven children, she describes her childhood as being happy, carefree and full of fun and of music. There was always music in the house. As children they were encouraged to sing and participate in local concerts and all kind of musical events. However, Trudi is the only one of her family to turn professional. Her late mother, Philomena Phillips, sang in local operas and was quite well known for her singing ability.
Secondary school for Trudi was the local Brigidine Convent. Every year they staged a school musical, and Trudi, blessed with such a diverse and extensive vocal range, was usually invited to play a major role in all the productions.

After completing the Leaving Certificate, she joined her local musical society and also sang at weddings and funerals to earn some pocket money. Trudi always knew that she wanted to sing for a living.
It was after attending a Declan Nerney concert and absorbing the atmosphere, the buzz and the energy, her mind was made up, she was hooked!

Following a short spell at hairdressing, she left the salon and followed her heart. As the saying goes ‘the rest is history’.

It didn’t take long for Trudi to establish herself as one of the best young singers on the country music circuit. Slowly but surely her reputation as an entertainer was gaining momentum. She formed her own country band and offers of work began to pour in.

Hazel Records in Monasterevin released a four track E.P. Money Talks and this was the musical injection that helped launch Trudi’s professional career.

The record received extensive radio play and was one of the most requested songs on country radio programmes at the time.

Ray Lynam produced her first album and this was surely the seal of approval from one of Ireland’s most talented and recognised album producers. Trudi also went on to record a duet with Ray in Nashville.
In fact she has recorded duets with many artists including Daniel O’Donnell, Billy Morrissey and Mick Foster, to name but a few. The duet that is closest to her heart is the old Jo Stafford and Gordon McCrea duet Beautiful Isle of Somewhere that she recorded with her late mother, Philomena.