She was invisible. Two pink-coated ladies stood at the wash basins, blonde headed, long pink-varnished nails, deep in intimate conversation. The only time they had looked at her was when she had entered the salon and told them tentatively that she had an appointment at twelve.

“That’s fine Modom – take a seat, Charlene will be with you shortly.”

One of the blondes shook back her mane of hair, catching some of it in her sweeping black eyelashes. So Mags had sat there, a copy of ‘Hello’ magazine between her hands, not really taking an interest in it’s contents, and feeling much more than her fifty years. Her birthday was tomorrow. She regarded it as a special milestone in her life. A day which would prove eventful if the happenings of the past few days were anything to go by.
She had lived on her own for the past twenty years. She had been married for the same length of time when Philip her husband had decided to take leave of the world after a heart attack brought on by his over-indulgence in the demon drink.

People had sympathised with her, but she knew by the looks of pity on their faces that they regarded it as a blessing for her, because Philip had not been a good husband, often violent, going on drinking sprees and coming home venting his frustrations on his long-suffering wife.

They had no family. Mags would have liked a family, she was a nurturing kind of woman, homely and very affectionate to her little nieces and nephews, never forgetting birthdays and holidays, ‘Auntie Mags’ always welcomed enthusiastically whenever she called to their homes. But she thought afterwards, that maybe it was just as well, because Philip might have been a violent father and she couldn’t have tolerated that.

Then there had been the telephone call just last week. She had been sitting in the living room, her feet up on the coffee table, a mug of Cappucino in her hands.

The telephone had rung insistently, and she got up slowly, reluctant to answer it, because she had felt extra tired after a day on her feet at the local supermarket where she worked as a cashier.

“Hello?” She enquired hesitantly. A phone call at ten o’clock at night might mean sickness, or somebody in trouble.

“Mags? Is that you – this is Matthew Reynolds, I don’t know if you remember me – we went to night classes together many years ago, I tried to contact you at various times over the past years, but there was no answer when I telephoned, and I presumed you had moved house….”

She wracked her brains trying to remember a Matthew Reynolds.

She had been going to German classes back then, just to get out of the house when Philip was in one of his moods. She remembered now, the mists beginning to dissipate. A man with black hair, one lock untidily falling across his forehead, nodding to her and smiling whenever he came into the room.

He had been living on the same side of town, and they had exchanged telephone numbers, in case he had told her, if she ever needed a lift to the classes, he could pick her up instead of she having to walk to the bus stop at the corner and take the bus to the college. She had never taken him up on the offer, because Philip wouldn’t have taken too kindly to a strange man picking up his wife to go to evening classes.

He invariably sat at the back, and she hadn’t really spoken to him much, because she had been in a hurry to get back home after the class in case Philip would get angry with her for staying out late.

“Matthew – of course – how are you?” She asked lamely. She could have laughed aloud because it sounded so blasé, so unfitting for a conversation with a man she had never thought about or seen in such a long time.

“I remember you as being a quiet, kind woman Mags, always so interested in learning, your homework always completed correctly.” He paused for a moment.

“I don’t know why I’m ringing you now, and to tell the truth, I thought you might still be unavailable and the phone would just ring off, so I’m not prepared for this conversation!”
He gave a small nervous laugh and immediately she pitied him. It must have taken a lot of courage to make the phone call.

“I was married then, Mags – but my wife unfortunately fell in love with somebody else – I wasn’t well for a long time after she left me, depression and anxiety took hold, and after a couple of years my mind wasn’t my own. But your face kept coming into my head…” He paused for a moment, and she listened breathlessly.

“I knew you as a kind person, a lady who would listen and comfort, a selfish thought on my part maybe, because how was I to know you might have problems of your own!”

“Well, it’s lovely to hear from you Matthew – and I hope life is treating you a little better these days.” Mags began to feel more comfortable, rather like talking to a very old friend.
“I was wondering Mags – would you come to dinner with me some evening? Just a chat and a nice meal between two old friends.” Mags mind had raced. This was a life-changing moment, she could either take up the challenge, or go back into her old life and wonder what might have been….

“It’s my birthday at the weekend – maybe we could meet…?”
“Wonderful!” There was no mistaking his enthusiasm. “What day is your birthday? We’ll have a celebration dinner, and I’ll book a nice restaurant for us.”

She had replaced the receiver shakily. What was she thinking of? A middle-aged woman feeling like a twenty-year-old on her first date. She looked in the mirror in the hallway. Her cheeks were flushed, and there was a sparkle in her eyes she hadn’t seen in a long time. So here she was, in the hair salon in the shopping mall and she had seen the sort of women they catered for, women who lunch, who attended ladies’ functions, who dined only in the best of restaurants and who coloured their ash-blonde hair every six weeks to avoid the tell-tale pattern of the growing-out grey lines.

And Mags Reynolds was waiting to be transformed into something resembling one of those ladies, although the way the two young madams were carrying on, it would take a long time before they would condescend to lay one of their hands on her hair.

“Excuse me – but I am in a bit of a hurry, and if it’s not convenient for you to take me now, then maybe I should go somewhere else?” She had taken enough. A door mat was not on the cards for someone who was about to celebrate her special fiftieth birthday and be taken out by a presentable man who obviously thought a lot of her.

They turned to her, a surprised look on their faces. She stood in front of them, her expression defiant, her eyes flashing with anger.

“Of course, Madam – take a seat at the wash basin” One of them demurred, seating her respectfully in the seat, while Mags closed her eyes and felt the warm water and shampoo massage her scalp, momentarily calming her. It was no harm to stand up for yourself every now and again, she thought, and smiled recognising the humour in her situation.

She left the salon transformed. Her mid-brown hair had been highlighted and tinted a soft golden brown. Her eyebrows had been shaped and she had treated herself to a mini facial, giving her skin a healthy glow. Her nails had been manicured and buffed and painted pale shimmering pink. The two pink-coated young girls looked after her, their expressions marvelling at the transformation. They had even treated her to a coffee and Special K Red Berry bar, instinctively trying to make up to her for their initial indifference.
She would need a dress. A special dress, short but discreet, figure-hugging but not cheap, and showing a little cleavage, but not too much, just a special dress that would impress and make her feel good about herself.

“It suits you to perfection, and the colour is just right!” The saleswoman enthused over the dress as Mags turned this way and that in front of the full length mirror. She hadn’t a bad figure for a woman of advanced years, she thought wryly as she admired the line of the dress as it slid perfectly over her narrow hips, the length just right, skimming her knees. Ivory-coloured, with a black silk belt tied in a bow at the side, the neckline complimenting her slim neck as yet devoid of any wrinkles.

The price was a little beyond her budget, but she said firmly to herself, it was her birthday, and she was entitled to a little bit of indulgence. She bought a cream evening bag and in a moment of recklessness, chose a pair of cream stiletto heel shoes with little sparkles of gold running through the leather. All in all, she told herself, she had purchased well, and tonight would be a special night in her life, one to be savoured and stored to memory long after it was over…

It had all been worthwhile when she stood in the doorway, watching his mouth open wide and his eyes taking in the woman before him. Mags blushed as she saw the admiration in his eyes.

“You look really lovely, Mags, and I’m proud to be taking out such a beautiful woman tonight!” He offered her his arm and led her to the car. She felt like somebody precious, somebody respected by a man who had come to her through some divine intervention was all she could think, because she had never put herself out there for anybody to take an interest in her after Philip had died. Something inside her had come alive now, and they chatted over their meal like two old friends who had known each other all their lives.
“I went to Germany to work for a few years after my separation” Matthew told her quietly. “Needed to get away for a while, away from the talk and the speculation which invariably follows a separation – that’s why I was attending the classes – my company had a sister office in Hamburg and I applied for the transfer”.

“I just went to the classes to get me away from an unhappy situation at home” Mags told him, sipping her after-dinner coffee. They sat in silence for a moment, each speculating on their past lives, and then Matthew leaned across and put his hand over hers.
“We’ve been given a chance here today, Mags – I don’t know why I telephoned you that evening – or what prompted me to make the call, but I don’t regret it, I’ve met a good woman and if you’re willing to take a chance, then I would be honoured to have your friendship.” She looked up at him, at the dark brown eyes, so sincere, yet so uncertain, waiting for her reply. 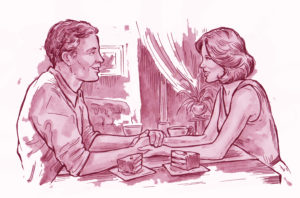 “I think that would be lovely, Matthew, we both deserve a second chance in life.” They looked at each other, their hands clasped tightly, and in that moment it was as though they were the only couple in the restaurant, their future locked in the warm promise of a new life together.

Read original short stories every week in Ireland’s Own