Kathleen should not be here. Not in this house, not living this life, not in this country. This was never her plan. From an early age she had known very clearly what she did want and had planned carefully how she would achieve it. Focused…that was the word her friends used when they described her…well at least that was the case until the pivotal moment in her life when she had met Brian and had without further thought thrown all her carefully laid plans out the window. That was ten years ago. 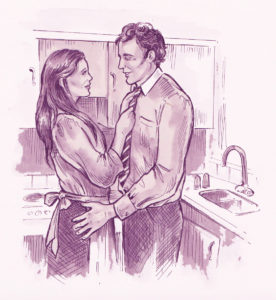 Fresh out of college in Dublin with her first class honours law degree the world was her oyster. Her mind raced back to her graduation ceremony in UCD that September.
The excitement of strutting into the hall in her cap and gown. The proud smiles of her Mother and Father as they watched their precious only child, the first to go to college in their family, as she was conferred with a Bachelor of Civil Law. She knew their hands were sore with clapping so hard for her as she sailed back to her seat, the sense of achievement filling her with excitement. She could do anything now, go anywhere, and be whoever she wanted to be.

The telephone made her jump and she raced to answer it fearing the worst. It was only someone wanting to discuss alternative energy suppliers with her. It wasn’t their day…it wasn’t her day. In fact she wished it was any day but today.

She made another cup of strong coffee and sat down, remembering how she met Brian working in a big city law firm in London. Straight from college she was a newbie and Brian was assigned to be her ‘buddy’ a practice the firm had developed for integrating the interns. She was waiting in reception on her first day when a well groomed guy in his late twenties with dark auburn wavy hair and navy blue eyes strode over to her. Tall and deeply tanned he smiled at her holding out his hand and introduced himself explaining that he would take care of her…she hoped he meant for the rest of her life.

Their romance wasn’t so much a whirlwind as a hurricane. It raced along with such an intensity friends said it could never be sustained.

Within two months he had begged her to marry him and, encased in the dreamy world of romance, she had agreed without even thinking about the practical consequences. She would listen to no one, not her parents who argued she was too young, had not given herself a chance to enjoy life or to her friends who took her to task over committing herself to the first guy she had allowed herself to get serious about. Within six months of starting her career she was married …and expecting her daughter. Her mother cried when she heard but they were not tears of joy but of sadness because she was afraid her daughter had wasted the precious opportunities she had been given and would regret her life. Three more children followed in quick succession and Kathleen had to admit that she would never qualify as a solicitor. The cost of childcare meant that giving up work to be a full-time mother was her only option.

Brian worked hard to make ends meet but he was called upon to work at all hours of the day and night as he worked his way up the corporate ladder. Kathleen settled with him in Wimbledon and soon the years swept by in a haze of sleepless nights with the babies, busy school runs as they got older and the humdrum of food shopping and housekeeping that was a chore but had to be done. Brian was now 39 and, facing his 40th birthday next year, he was finally offered a full partnership in the firm, a reward for the dedication he had shown to the job. He was still handsome his auburn hair now tinged with the first signs of maturing grey and frown lines spelt out the years of concentration on his forehead.

Kathleen looked at her reflection in the mirror. She had to admit that at 33 she looked her age. Being responsible for four little people who depended on you to feed and clothe and love them daily brought a maturity to her that her close friends hadn’t yet found.

Her relationship with her mother had never recovered from the shock caused by her abandonment of her career and life goals. Brian too had been affected by their decisions. She knew he felt deeply guilty that she had to give up her career to raise their family. Try as she would to convince him otherwise he felt she secretly resented the choices she had made because of him

She tried to think back before the children, before Brian .What was it she had wanted so badly? What was it she had missed out on? What had her friends got that she hadn’t?
Growing up she had pictured herself as a human rights lawyer defending the disenfranchised, the poor, the people with no voices.

She would study hard, get her law degree and qualify as a solicitor then look for a reputable charity and start to build the experience she would need to fulfil her dreams. Marriage was not high on her agenda and the truth was as a teenager she never thought much about having a family. No, hers was a nobler calling, She would make a difference to humanity, she would change things for the better. She planned on living in London while she qualified and returning to her hometown of Killarney with its beautiful National Park and rugged coastline which was ever dear to her heart. She would base herself there near her parents. As an only child she wanted to be a support for her Mother and Father and to see them as often as she could while flying abroad to undertake her international work.

A big tear rolled down her check splashing into her cup. She missed her Mother so much. Missed the closeness they once had. Missed the pride in her Mother’s eyes as she looked at her. Her Mother visited a couple of times a year and Kathleen tried to make as many trips to Killarney as she could. But somehow they could never get back to the way it used to be. Her Father and Brian got on well discussing sports and politics but they didn’t understand the gulf she felt between herself and her Mum. If only she and Brian could have moved back to Killarney. There was no hope now that he had finally been made a partner. She was in Wimbledon and in Wimbledon she would stay…at least if her worst fears didn’t materialise.

Afraid…she realised that she had been afraid for the last six months. Ever since Brian had taken to disappearing off on business trips and was secretive about his destinations.
Confidential he had said, not something he could tell her. Did he really think she was that big of a fool? It was obvious to her that there was someone else in his life.

He had taken to making late night calls on his mobile and when she asked who he was speaking to he had made random excuses about following up with clients out of hours. He had been away this last week and had said he wanted to speak about something very important with her on his return.

Important…that could only mean one thing couldn’t it? He had finally decided to leave her. He was seeing someone else, the reason for the business trips and late night calls. It was an old story surely. One she had heard many times from friends. And yet she could not really find it in her heart to believe it. She still loved Brian deeply and up to a few months ago was convinced he felt the same despite their ups and downs.

It never rains but it pours her Gran used to say and she was right. Kathleen had just had a call from her Father an hour ago saying her Mum was in the hospital with a fractured leg having tripped on her way to Mass and was having it set in the local hospital under anaesthetic. Kathleen was sick with worry and willing the phone to ring and for her father to say her mother was out of the operation and in recovery.

She heard the key in the lock as Brian arrived home. Throwing his bag in the hall he wandered into the kitchen. Seeing her white tearstained face he flung his arms around Kathleen and she, relieved to have him home and yet scared to hear his news, told him between sobs about her Mum. He made her a fresh cup of tea and gently took her hand in his. “Kathleen,” he said in a low voice, “there is something you should know.”

Ashen faced she could barely look at him and tried to speak but nothing would come out.
“Kathleen I have always always regretted the way I rushed you into marriage,” he began.
Oh no, he regretted their marriage. This was it. It was really over. She needed to face it.
Brian saw the shock on her face and continued gently.

“Honey you have sacrificed so much for me and the children and I know I haven’t been here when I should have to give you support. I know you have had a hard time away from your home and your family especially your mother and that you never had the chance to reach your full career potential because of my selfishness.

“Well I have been thinking and planning and I have something amazing to tell you. This partnership I have been offered is based in Ireland. I have been asked to set up a branch of our office in Cork. The trips I have been making have been to assess the potential and find suitable premises. I didn’t want to tell you in case it fell through but I have just sealed the deal. I have also been looking for a temporary house for us until we can choose our new forever home together. That can be in Killarney if you want to be near your Mother or anywhere else you want my darling, because I will do whatever I can to make up to you for all that you have had to give up because of me.

“I have also made enquiries with the Law Society in Dublin and you can enrol to continue your studies if that’s what you want and take up an apprenticeship at our new branch in Cork.

“The children are in school most of the day and with my new position I can afford for us to have a nanny if you think we need one. Darling please say something.”

Kathleen’s brain was racing. trying to make sense of what Brian had just said. He wasn’t leaving her? There was no one else. He still loved her! He loved her and he was willing to move to Ireland for her. She would be near her dear Mum and Dad, They would rebuild their bond. There was time…there was still plenty of time. Time for her Mum to truly get to know the wonderful man she had married and for her children to finally have their grandparents in their lives. That is…if her Mum survived the operation…

She nearly jumped out of her skin as her mobile screeched on the table.
“Kathleen. It’s your dad. Mam is fine. She’s in the recovery room. What did you say? You’re coming home…for a visit…for good? Really darling girl? Oh Kathleen that’s grand it’s really grand…the best present you could ever give to us. Just wait until I tell your Mum… sure she will think she has died and gone to Heaven!”