Sylvester Stallone, known as Sly to his friends, is an amazingly successful American actor, screenwriter, producer and director. He is famous for his Hollywood action roles, particularly Rocky Balboa in the seven films in the Rocky series. 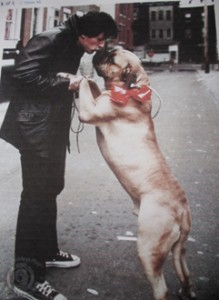 He played John Rambo in the four Rambo films and Barney Ross in the three Expendable films. He wrote or co-wrote most of these 14 films and directed many of them.

Sylvester was born in New York City in 1946. His birth was very difficult and two pairs of forceps were used by the obstetricians. This caused permanent paralysis to parts of his face, including his lip, tongue and chin. This gave Sylvester his snarling look and slightly slurred speech. He attended High school in Philadelphia and then decided to start a career as a film actor. For a number of years he got only bit parts.

Sylvester Stallone went through hard times. At one point in 1975 he could not pay the rent on his apartment and ended up sleeping rough in the New Jersey bus station!
He was so short of money that he could not afford to feed his dog Butkus. This forced him to sell the dog to a man he met outside a liquor store. Sylvester said that he cried as he walked away from the dog.

Two weeks later Sylvester watched the boxing match on TV between Muhammad Ali and Chuck Wepner. Seeing Chuck Wepner last 15 rounds against the great Ali inspired him to write the film script for the movie Rocky. He wrote it in 20 hours, without taking a break.
Sylvester then approached a film studio with the script and they loved it immediately and offered to buy it for $125,000. But Sylvester was determined to play the leading role in the film.

The studio people told him that ‘he looked funny and talked funny’ and they wanted a ‘real star’ for the film. Sylvester would not agree to this and withdrew the script.

A few weeks later the studio offered him $250,000 but again Sylvester refused, insisting on playing the part of Rocky. Eventually Sylvester accepted $35,000 for the script on condition that he starred in the film.

The film Rocky was a phenomenal success. It took in $225,000,000 at the box office. In 1976, it won academy awards for Best Picture, Best Directing and Best Film Editing. Also Sylvester was nominated for Best Actor. And what did Sylvester do with the $35,000 fee he got for the film script?

He went back to the area where he had sold Butkus, and spent a few days waiting to meet up with the new owner. When this happened, Sylvester offered the man $100 for the dog but he refused.

Sylvester kept offering more and more money and eventually paid the man $15,000 for his beloved Butkus! He was delighted and afterwards he used the dog in two of the Rocky films.

We know that movie stars must be very tough to get to the top.
But when a man like Sylvester Stallone had to sell his dog when he could not feed him and then spent a fortune to buy him back, we know that this superstar has a heart of gold.