25 years ago twin brothers, Rod and Dave Guiney, brought the Liam MacCarthy back to the banks of the Slaney, a dream sporting adventure that the people of Wexford will never forget, writes Shea Tomkins

There is an old, inaccurate, saying that lightning can’t strike the same place twice, but the late Offaly hurler, Adrian Cahill, told a good story about how one day it did for him, and it happened on a hurling pitch.

The year was 1991, and Adrian was lining out for The Faithful’s Under 21 team, against Wexford.
On the opposite team, a fresh-faced Rod Guiney was playing his first game at that level for the Slaneysiders, in centre-field. Adrian was a classy, talented, hurler and within five minutes had scored 1-4 on his marker.
Rod heard his name being roared by his manager, who instructed him to switch men, to go mark Cahill. He ran over to Cahill, who teasingly pointed his finger up at the scoreboard, and the gauntlet had been thrown. “That’s your last score, mate,” thought Rod, who picks up the story.

“Adrian, God rest him, and who I got to know well later on, went for the ball, but I made sure to be in there faster and harder, and he didn’t get a puck of the ball after that.
“The Offaly selectors decided that if they switched him, they would catch me out on the other side, so they got word to him and Adrian bolted off while I stayed where I was. But when he got there he suddenly saw me standing right there beside him again, and he did a double-take.
“He said, ‘How the hell did you get over here so quickly?’ But sure it wasn’t me he was looking at, at all, it was Dave!” The secret of the Guiney twins was out. 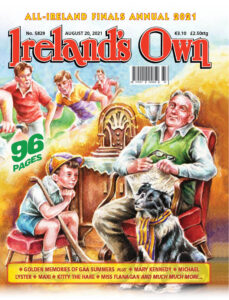 Rod and Dave Guiney grew up in Kilrane, near the port of Rosslare. Sons of Irish rugby international, Jack, their parents ran a busy pub which at one stage poured the most pints of Guinness in Leinster, outside of Dublin City.
“Dad used to bring us to the international rugby matches and we were in awe of these guys such as Moss Keane, Willie Duggan and Ollie Campbell,” recalls Rod.

“Con Houlihan wrote that Dad was the best back row in Ireland from 1936 to 1946. He loved rugby but he had a passion for athletics and was a great athlete, sprinter and an exceptionally strong man. He still holds a hop, step and jump colleges’ record in Ireland.

“We were only thirteen when he passed, and he never really got to see us play. We won a lot of football championships with St. Mary’s in Rosslare, and I played senior football at a young age, but he wouldn’t have seen that.”

Dave adds, “Dad was involved with Wexford Wanderers rugby club and from an early age we were watching rugby from the sidelines, drinking lemonade and eating crisps.
“We have great memories of that 1982 Triple Crown winning team and being at Lansdowne Road for the first game, against the Welsh.

“We were only twelve and finding it hard to see the match with all the adults in front of us. Then these Welsh monsters threw us up on their shoulders and we had the best seats in the house.
“Dad didn’t push the sporting thing on us and when he passed away, we sort of lost the rugby connection. The GAA club was closer to where we lived, and that’s where we gravitated towards.”