Whatever Happened to Kitty O’Shea?

She was one of the most famous – or infamous – woman in Irish history, yet she never set foot in the country. If she had not fallen in love with Charles Stewart Parnell, the leader of the Irish Home Rule movement, he might have achieved his dream of a united and independent country. In that case the heroes of the 1916 Easter Uprising would not have had a reason to take over the GPO in Dublin a hundred years ago, and neither the Queen of England nor the Irish government would need to remember their sacrifice. Indeed Ireland may never have been divided in two.
Who was Kitty O’Shea? The flame-haired temptress portrayed by Parnell’s enemies, or a woman trapped in a loveless marriage who unexpectedly found love when approaching middle-age? 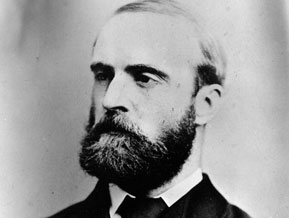 ‘Kitty’ was a name she would have hated, as it was slang for a woman of loose morals. In fact, she only loved two men in her life and married both of them, though the marriage to Parnell was to prove tragically short-lived as he died in her arms after a few brief months of happiness.
She was born Katharine Wood in 1845, and was known as Kate to her family. Her father was a baronet, a member of the British aristocracy and her brother a Field Marshall, although their grandfather had started life as an apprentice and was a self-made man.
The Woods were closely linked with the Gladstone family and Katharine often acted as a go-between with William Gladstone when Parnell was trying to persuade the British government to grant Ireland independence.

She had married William O’Shea at the age of twenty-one, not long after the death of her father, and the marriage had produced a son and two daughters. O’Shea neglected his wife and pursued his own pleasures while she was often left to bring up the children alone, while also looking after her elderly aunt Ben. She played the part of a dutiful wife, however, and hosted dinner parties to help her husband’s career. Parnell, an important figure in Irish politics, was always invited, always accepted and yet never showed up. Annoyed and perplexed by these apparent snubs she went to confront him in person at his office in Westminster in July 1880. The effect was immediate.
“This man is wonderful and different,” she was to write later.
Parnell was a bachelor who had once loved and been rejected, and never took an interest in women again until he met Katharine.
It was a suicidal love as she was married to a fellow Irish MP and was a respectable wife and mother.
The power of the attraction between the two, however, was impossible to resist and before long they were living together in her home in Eltham in the suburbs of London. They had an illicit ‘honeymoon’ in Brighton and Katharine was to bear three children to Parnell while still married to O’Shea, the first of whom died soon after being born.
It is even thought that she bore Parnell a son who could take his name after they finally married, although this child was stillborn.
O’Shea knew of the relationship but turned a blind eye to it. Then Aunt Ben died and left Katharine a large inheritance and he decided to divorce his wife and shame Parnell publicly. The ensuing scandal ruined Parnell’s career and his health. His traditional supporters in Catholic Ireland turned away from him when they learned he had been living with a married woman even though he and his beloved Katharine became man and wife after they married at Steyning register office in Sussex, the county where they made their home.
In an attempt to revive his flagging fortunes, Parnell went to Ireland and spoke at a public meeting in County Galway. He was caught in a thunderstorm and developed a chill from which he never recovered.
Seriously ill, he returned to be with Katharine and died soon afterwards. They had been married for only four months.
It is estimated that half a million people lined the streets of Dublin to pay their respects to Parnell as his coffin was taken to Glasnevin cemetery to be buried near Daniel O’Connell.
Later Eamon de Valera and Michael Collins were also laid to rest nearby. On the granite stone above his grave lies just one word – ‘Parnell’, enough to identify Ireland’s flawed hero whose dream of a free and united country at peace with Britain was destroyed by his love for a married woman.

And what happened to Kitty, as the world now knew her? It was all too much for her and she lived out her days quietly in Sussex. She never married or fell in love again but looked after her children and died at the age of seventy-five. When she was buried, only her immediate family came to the funeral and on her grave monument were the names of both her husbands with that of Parnell, the great love of her life, above that of O’Shea who gave her the name she is known by. There is no sign of ‘Kitty’, however.
By the gravestone is a plaque placed by the Parnell Society with Parnell’s promise to her: “I will give my life to Ireland, but to you I give my love.”
Postscript: these passionate but unfortunate lovers were portrayed on screen by Clark Gable and Myrna Loy in a Hollywood movie made in 1937. The film was a rare flop for Gable and, after its failure, he told the studio bosses he only wanted to play contemporary parts, saying he would never again put on ‘a d—–d frock coat’. A year later they offered him the part of Rhett Butler in Gone with the Wind and he accepted, winning an Oscar for his portrayal of the charming gambler.

From the April Spring Special 2016