When Charles Dickens Came to Ireland

This month marks the 150th anniversary of the death of Charles Dickens, who died on 9th June, 1870. He was widely regarded as the greatest novelist of the Victorian era and he was also one of the best-known celebrities of his generation. Dickens undertook a number of tours, which included lengthy stays in Ireland, and he enthralled sell-out audiences with his readings from his famous works, writes Gerry Breen.

Charles Dickens’ first visit to Ireland was in 1858. He travelled by ferry and arrived in Dublin on 21st August. He stayed in Morrison’s Hotel, Nassau Street, and we are told that he wandered around the city for quite a while and then took a carriage ride around the Phoenix Park.

He was, apparently, a little bit worried about how he would he received, but 3,000 fans filled the Rotunda (now the Ambassador Theatre). We are told that in the centre of the platform there was a small table covered with a green cloth and a stand for his book. 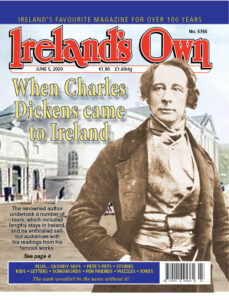 There were no microphones, of course, but a screen had been set up behind him to help to project his voice. A spotlight was provided by a row of gas jets overhead. He was a superb mimic and as well as reading from his books, he provided impersonations of the famous characters he had created.

He was given an enthusiastic reception and he was impressed by the quickness of the audience to appreciate his humour.

In Belfast, so many attempted to get into his performance that the police were unable to control them. He noted that in Belfast, the personal affection which he was shown was ‘something overwhelming’.

From Belfast, he travelled to Cork, where he stayed in the Imperial Hotel, and again his performances were a great success, with people being turned away. Special trains and steamers had been put on so that people could attend the famous writer’s readings. He kept his audiences spellbound for two hours with brilliant impersonations of the characters from his books. Before leaving Cork, he kissed the Blarney Stone.

The final stop on his tour was Limerick, where he stayed in the Royal Hotel and gave readings at the Theatre Royal for two nights.

Dickens was obviously well pleased by the welcome he received in Ireland and he came back again on two further occasions – in 1867 and 1869.