When Jackie Came to Ireland

Kay Doyle recalls the time fifty years ago when Jackie Kennedy, wife of assassinated US President John F. Kennedy, holidayed in Ireland with her two children.

Met Éireann records tell us that the summer of 1967 was a very warm one in Ireland. Indeed, on 25th June of that year there was a considerable lightning storm, with heavy showers which, when it passed, gave rise to more heat and sunshine. 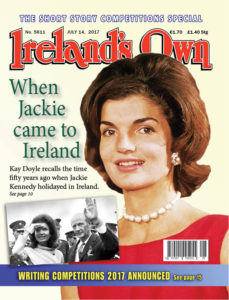 We don’t know if the lightning struck in Waterford, but it is quite possible that people wouldn’t have noticed anyway. June of 1967 was exciting and memorable there for another reason – it was the summer that Jacqueline Kennedy, or ‘Jackie’, decided to holiday there.

Four years after the assassination of her husband, American president John F. Kennedy, Jackie was fulfilling a wish that her late husband had made some years earlier – to bring their children to the homeland from where his ancestors had come.
In a letter she penned to President Eamon de Valera, dated January 22nd, 1964, Mrs Kennedy wrote:
“He was so conscious of his heritage – and so proud of it – and Ireland can be proud that they gave the United States its greatest President. Now these words may sound the words of a bereaved wife – but in a generation that is what they will be teaching to school children.

“I know your country mourned him as much as his own country did – and through you I thank them for that. I will bring up my children to be as proud of being Irish as he was. Already, our house is named Wexford and they play with those beautiful animals, the Connemara pony and the deer. Whenever they see anything beautiful or good they say ‘that must be Irish’ – and when they are old enough I will bring them there.”

Sadly, President Kennedy would never return to the Dunganstown homeplace in Co. Wexford and his 1963 visit would be his final one. By 1967, his daughter Caroline was 10 and John Jr was six years old. It was time to fulfill a family promise.

Accompanied by family friends, the Murray McDonalds, Jackie and the children landed at Shannon airport for what would be an important six weeks in their lives.
Although a visit to cousins and relatives in New Ross was on the agenda, it was Woodstown House in Waterford that was chosen to house Mrs Kennedy and her American friends.

It was the late racehorse trainer, Phonsie O’Brien, who was instrumental in finding Woodstown House as a suitable accommodation prior to the visit. O’Brien trained horses for Anne Ford, wife of Henry Ford, of the car-making dynasty. Anne’s brother had been good friends with the late President, and so a connection to Jackie Kennedy was already in place.

Continue reading in this week’s Ireland’s Own (issue 5611)