When Laurel & Hardy Came to Ireland

The famous Hollywood comedy duo of Laurel and Hardy visited Ireland in both 1952 and 1953. The pair consisted of Englishman Stan Laurel and American-born Oliver Hardy, who was known to friends as ‘Babe’. Their slapstick comedy routine made them into international stars in the late 1920s.

They also successfully moved from silent films to the so-called ‘talkies’, something that many of their peers failed to do. However, by the end of the 1940s, ageing and with declining health, Hollywood started to turn their back on them, leading them to return to the theatre. 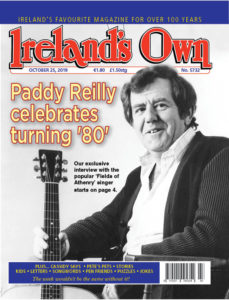 They embarked upon a series of European tours. For their first trip to Dublin in 1952, they played at the Olympia theatre for two weeks. Their act was well received and critics wrote positive reviews. They stayed at the Gresham Hotel during their visit.
The following year they returned to Ireland on September 9th, this time arriving by the passenger liner SS America to Cobh, Co. Cork. They had come to Ireland to rehearse while problems with Hardy’s visa for their UK tour were resolved.
Throngs of people came out to greet them. Boats in the harbour sounded their horns and St. Colman’s Cathedral rang its bells to welcome them. They were so overwhelmed by the warm reception they received that day that they spoke about it for many years to come.

Laurel later recounted how “All the church bells in Cobh started to ring out our theme song, and Babe looked at me and we cried.” Laurel later stated to a friend that it was the most memorable day of their careers.

Upon first seeing the crowds waiting on the quay, Laurel and Hardy were perplexed as to what was happening. With their fame having waned in the US, they were not expecting a welcoming committee.

However, when their signature tune ‘The Dance of the Cuckoos’ rang out, they knew the excitement was due to their arrival. The music was played using the carillon in the cathedral’s bell tower.