When Princess Grace Came to Ireland

She was the beautiful actress who became a fairytale princess, but Grace Kelly was proud of her Irish roots and when she came to Ireland with her husband Prince Rainier sixty years ago to visit her ancestral home in Mayo, the whole country was enthralled, writes Maxi.

Sixty-five years ago, in April 1956, the actress Grace Kelly married Prince Rainier Grimaldi of Monaco and became Her Serene Highness Princess Grace of Monaco. The press labelled her story ‘a fairytale’ but, as we know, every achievement is preceded by hard work and determination. Grace’s story is no different.

Beautiful, talented, and ambitious she had early examples of strong people in her life. Starting with her paternal grandfather, John Kelly from Drimurla, near Newport, Co. Mayo, who had the courage to leave the cottage which was his birthplace and move to Philadelphia in 1887, bringing with him his strong Catholic faith, a love for hard work and a value for his Irish roots. There he set up a construction company and, with time and clever management, he became a rich man. His family inherited both his talents and his fortune. 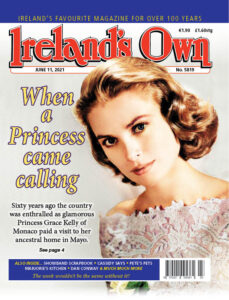 Five years after her marriage to Rainier, Grace expressed a wish to visit the cottage where John Kelly had lived. In 1961, when Ireland was thirsty for glamour, excitement and proof that dreams can come true, the royal house of Grimaldi announced that her Serene highness, Princess Grace of Monaco and her family would travel to Ireland on a State visit and furthermore spend four days on a private vacation to connect with Grace’s roots.

President John Fitzgerald Kennedy had been inaugurated that year and it was with great pride we had watched on our black white televisions sets as the handsome tanned young man, whose ancestors had come from Dunganstown in Co. Wexford, took the oath.

Now, in the same year, an Oscar-winning actress who had met and married her prince in 1956 – and was, as a result, her Serene Highness – was making a state visit to connect with her ancestral roots. The eyes of the world were on Co. Mayo in Ireland.

All immediate leave for the press and for the Gardaí was cancelled until after the couple and their children – Caroline who was four and Albert – who was three, had left to return to the principality of Monaco. In the lead up to the visit we could read the details of the how a small holding in Mayo was forever connected to one of the richest families in the United States.