When the ‘Blackbird of Avondale’ was Attacked in Kilkenny

October 6th marks the anniversary of the death of Charles Stewart Parnell and this year October 7th marks Ivy Day, a day observed in memory of the ‘uncrowned king of Ireland’ held annually at his Glasnevin graveside on the Sunday nearest October 6th.
Parnell inspired many a poet and balladeer and one of the most famous songs about the Home Rule leader came from the pen of his own sister. Fanny Parnell wrote The Blackbird of Sweet Avondale after the arrest of her brother in 1881.

While Parnell was under lock and key in Kilmainham Gaol, his sister’s ballad appeared as a broadside in the United States. Also known as The Arrest of Parnell, the ballad takes it’s air from a 17th century tune called the Lady’s Lamentation.
The ballad was recorded by many, including Scottish folk band Silly Wizard in the 1970s and a haunting rendition, and probably one of the best rendition’s out there, appears on the Wolfe Tones 1974 album Till Ireland a Nation. 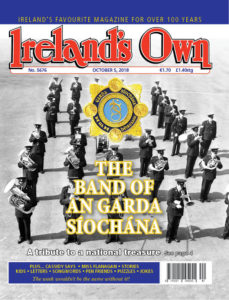 The ballad became a popular one with Parnell supporters, of which there were many across Ireland and afar but, as his political career saw him reach new heights in Ireland’s quest for independence, it ended prematurely and tragically.

Towards the end of his days Parnell’s affair with the married Kitty O’Shea resulted in his Irish Parliamentary Party splitting.

A year before his own demise, Parnell strove to repair the fractured nationalist movement and travelled extensively around Ireland delivering speeches at rallies and lending support for his candidates who stood in numerous by-elections.

The mood in the land was a fiercely bitter one as society was split between those who supported the ‘Uncrowned king’ and those who vehemently opposed him and this hateful division spilled out into a sad scene in Castlecomer one cold winter’s day in 1890.

A by-election in the constituency of North Kilkenny was triggered by the death of Mullhallen Marum MP and what followed was a fiesty campaign to fill the vacant Westminster seat.