When The Irish Reaped Harvests of Glory

Gerry Breen recalls the pivotal role played by Brigadier General Thomas F. Meagher and his Irish Brigade in the Battle of Fredericksburg during the American Civil War

The braveness of Irish soldiers in battle is universally recognised, but it was never more in evidence than it was at the Battle of Fredericksburg during the American Civil War.
The American President Abraham Lincoln and his generals had high hopes that this battle would be an important turning point for the Union, but the Confederates, under General Robert E. Lee, gained a stunning and decisive victory, with Union casualties more than twice as heavy as those suffered by the Confederates. 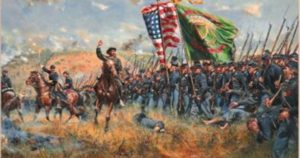 It was one of the costliest and bloodiest battles of the entire war and the outcome was a bitter blow for President Lincoln and a huge boost for General Lee.

Speaking about the battle later, General Lee recalled that one of his most vivid impressions was the part played by Thomas Meagher’s Irish Brigade in the Union Army’s assaults on the Confederate lines.

‘Never were men so brave’, he said. ‘They enobled their race by their splendid gallantry on that desperate occasion. Though totally routed, they reaped harvests of glory. Their brilliant, though hopeless assaults on our lines, excited the hearty applause of our officers and soldiers.’

This was a remarkable tribute to the gallantry of the Irish by the commanding general of the opposing army. In the course of the battle, the Irish Brigade suffered the loss of 53 commissioned officers and 488 men, but the reputation gained by their courage will never be forgotten.

General Lee had positioned his army along wooded hills known as Marye’s Heights on the west bank of the Rappahannock River in Northern Virginia. He placed his cannon on the Heights and his infantry along the slopes beginning at a stone wall which ran along the foot of the slopes.

In order to engage with the Confederate troops, the Union army had to cross the river and capture the town of Fredericksburg before moving across an open area to attack the soldiers placed by General Lee behind the stone wall.

From the Union side, the stone wall seemed to be only about a foot high, but, in fact, there was a sunken road on the other side, and this ensured that the soldiers standing behind the wall had adequate protection from any frontal assault.