Who was Bridey Murphy?

Mike Webster tells the story of US housewife, Virginia Tigh, who claimed to have been Bridey Murphy in a former life…

In 1965, Morey Bernstein, an amateur American hypnotist, published a book entitled The Search for Bridey Murphy. This came as a direct result of the many consultations he had been having with one Mrs Virginia Tigh between November 1952, and October 1953. Mrs Tigh had been Bernstein’s subject for ‘hypnotic regression’ – the search into the subconscious for signs of a previous existence.

Hypnotic regression into previous lives is really nothing new. This phenomenon has been studied for over a century, but the early pioneers of the subject were unable to leave much in the way of findings to posterity due to the lack of sound technology at the time.

Whilst many cases examined in recent years have yielded some surprises and left plenty of questions unanswered, they have mostly been subjects for further investigation. 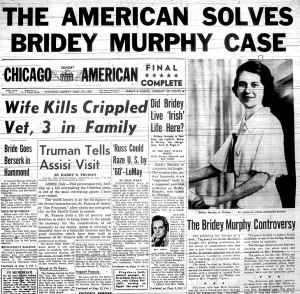 Most cases in fact have created very little interest, purely because the facts have not been made public. Bridey Murphy’s celebrated case was different.

It became the focus of heated debates in many American newspapers and, in 1956, it even found itself in the form of a film, shown in a wide range of English speaking countries.

Mrs Tigh was twenty years of age at the time, and she lived in Madison, Wisconsin. Before her marriage, she had lived from the age of three in Chicago.

She had never been to Ireland and she had never found herself having anything to do with that country either. Bernstein successfully regressed Mrs Tigh into a past life in early 19th century Ireland.
Under hypnosis and speaking with a distinctive Irish accent she stated that her name was Bridget (Bridey) Murphy, the daughter of Duncan and Kathleen Murphy of The Meadows, Cork.